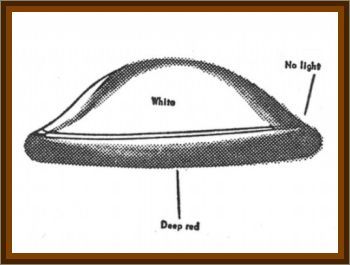 An instrument technician, while driving from a large city toward Larson Air Force base, saw an object from his car at 7:30 p.m.

He stopped his car to watch it.

It suddenly moved up toward the zenith in spurts from right to left at an angle of about 45°. It then moved off in level flight at a high rate of speed, during which maneuver it appeared white most of the time, but apparently rolled three times showing a red side. About halfway through its roll it showed no light at all. It finally assumed a position to the south of the planet Jupiter at a high altitude, at which position it darted back and forth, left and right alternately.