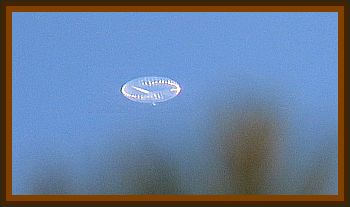 Dr. Lincoln LaPaz with wife and 2 teenage daughters were driving west on Hwy 60 when they saw a sharply outlined, white oval seemingly luminous 200' object wobbling in the distance to the west, probably 272º azimuth initially, about 25 miles away. ±5 miles; distance from triangulation of the cloud bank by driving around it by about 90º over 50 miles along Hwy 84 and weather data.

Object about 30 seconds almost motionless at a low speed of about 150 mph, then disappeared behind a cloud at 273º azimuth elevation 1º but reappeared 5 seconds later further to the right, or north, and higher at 275º azimuth 2º elevation, about 1 mile distance traveled thus an average speed of roughly 600 mph to 900 mph, peak velocity about 1,400 mph at about 13 gs, but no sound, no trail.

Object continued to slowly drift north about 2 minutes, in level flight, until disappearing in the cloud bank, at about 287º azimuth. 2.5 minutes.

If it had not been for the LIFE Magazine article and Hynek's survey, all we would probably have about this one is a listing in LaPaz's catalog of 200 green fireball events.