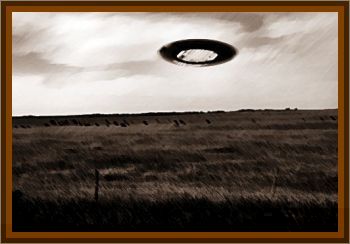 In the early hours of May 13, 1962, a close encounter of the 2nd kind, of unusual characteristics.

In this instance, three trucks, all belonging to the same company, were traveling on the road, driven by Gauro Tomassini & his brother Valentino, the 2nd truck driven by Humberto Zenobi, and the 3rd driven by a driver named Martinez. They went from Bahia Blanca to the Pampean town of Jacinto Arauz.

Testimony of Mr. Gauro Tomassini, married, 31 years old, owner of a repair shop for motorcycles and bicycles, located at Juan Milna 490, in the city of Bahia Blanca. His other activity is that of a truck driver and as such, he usually travels along the national route #35, towards La Pampa.

I did not believe at all in the appearance of strange bodies and I thought stories about flying saucers. All this, until 4:30 a.m. on Sunday, May 13, 1962. We were traveling, as usual, on route #35, and when we got to mile 72, we saw a light that was on and off intermittently. It was a light like a lantern, but white. It went out and went on evenly. It caught our attention and we thought it was someone who was signaling us. We were, according to calculation, about 650' from the light. We slowed down the truck and put low beams on, when a row of lights appeared before us.

I said to my brother:

Look, a train is coming, and point to the right side.

My brother, who knows the route better, replied:

It can not be, because there is no track here. Then we made the switch to neutral and walked very slowly to observe. Then we thought it looked like a passenger bus.

But my brother said:

They are two buses, do not you see how long it is?

I thought then that there would be a crossroads and that these buses would go there.

The object had the magnitude of two omnibus. You could not see shapes, but if the lights, like some 20 or more sure about 30. They look like windows, but rectangular and landscape. I deduced then that that vehicle, which was stopped, could be about 60' long.

We approached about 225', when the object started to rise. It did it slowly, very slowly, almost I would say, like 20 or 30 seconds, I could not specify, because we were impressed by what we saw. When I recovered a bit, I, who was driving, managed to turn on the high beams and immediately, as a reaction, increased the intensity of that row of lights, with so much power that it almost became like a mass of light that annulled our spotlights, and just at the same time two green lights were lit,

One in front of the object, the other in the middle.

The other lights were white, pure white like mercury gas, but more intense. It was like a cloud of light. The object was already about 10' high and began to move from inside the field, about 120' from the road fence. Passing, always slowly, over the route and when it had crossed transversely, it gave off an intense light from below, obliquely backwards, a flare like the one of car exhaust, but of a diameter of 20" and 3' long, followed by a small trail of smoke. Simultaneously with the glow of that strong, fire colored light, the white lights were no longer visible.

The object began to ascend and move away very quickly. That escape of fire was always visible. When the object of elevation, we saw that the row of white lights was divided into two equal parts, and each of them was headed by a green light. We saw then that the object was not one, but two and that the green light we saw in the middle was the tip of the other. So much so, that immediately they left, they followed different directions, one went south and the other west.

When I approached the truck and stopped at Mojon 72, turn off the lights and also the engine. There was no noise whatsoever, but when that fire escaped I felt like a whistle, like the one heard on the telephone poles of the field.

When returning by the same way, Tomassini and Zenobi, to the afternoon of the same date, deliberately stopped in the place to locate it with precision and to verify what there was in it. They saw in effect, an area of about 5' in diameter in which the plowed land looked like blowing. Also marks were observed as produced by some heavy object. One of these tracks was about 60' from the other, which would indicate that each footprint would mean the settlement of the UFO, and that the sum would be two, which is adjusted to the visual version. Numerous wet greyish spots were also found, which were subsequently taken for analysis at the Universidad del Sur. The results of this study determined that the whitish layer adhered to the ground of the landing was composed of a high percentage of calcium carbonate and a remnant of potassium carbonate, not warning of the presence of radioactive material.

The investigation of this unusual incident was officially implemented by the Head of the Information Division of the Naval Base of Puerto Belgrano, captain of frigate Luis Sanchez Moreno and his assistant the second noncommissioned officer Jose Perez. The Secretary of the Navy, who sent a delegation chaired by the frigate captain Dr. Constantino Nuñez, also took part.

With respect to these unusual events, it is interesting to remember the statements, which in such circumstances the frigate's captain Sanchez Moreno will pronounce:

For a few days we have the testimony of 4 people, who deserve all the faith and match the journalistic information that you give. Indeed, these 4 people, traveled by car, on Sunday, May 13, at 4:30, and at a distance very close to the previous case, saw 3 bright objects very close and which clearly distinguished. They ran these objects a stretch in the same direction of the vehicle, with a dazzling light, to such an extent that inside the car each passenger could see and see the interior as in full sunlight. And something else, one of them had to undergo a medical treatment because the intense luminosity had hurt his retina. These objects were clearly distinguished, having as background the elevation of the ground, and the most striking is that one of them had to make maneuvers of ascent and descent to avoid the trees, which indicates that it moved at ground level.

The expressions made by the captain of Frigate Sanchez Moreno made it clear the seriousness with which the Navy, through its intelligence agencies, faced the testimonies referred to the appearances of allegedly anomalous luminous phenomena.