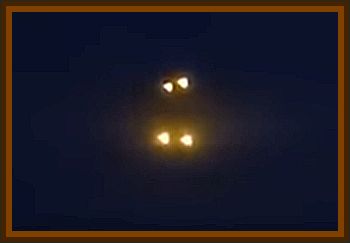 My wife and I stayed in that night, the villa we use has a clear view across the the sea looking out towards Fueventura to the right and full clear view from left to right, say from the airport in Arriceffe to the mountains to the right.

I have an interest in aircraft, spent several years in the R.A.F. one of my jobs was to keep an eye on aircraft movements and to identify them. What my wife and I saw were not aircraft as we know.

That night we had finished watching a DVD so I stepped outside on the top patio, and looked up into the sky a few hundred feet above the horizon and noticed 2 bright lights together. I first thought that it was either one or two aircraft coming into land until they split and started dancing in the sky coming closer to us, then after about a minute they quickly reversed towards the island of Feuventura and they faded away in the distance.

We were both amazed at what we saw, my wife never believed me that I had seen other similar objects in the sky over the years, now shes a believer.

My opinion is that it wasn’t an aircraft as we know, it wasn’t a light display, it wasn’t 2 helicopters, it wasn’t a freak of nature, it was 2 unidentified flying objects. The next day I spoke to several people some local, no one was interested.