What Would This Be? 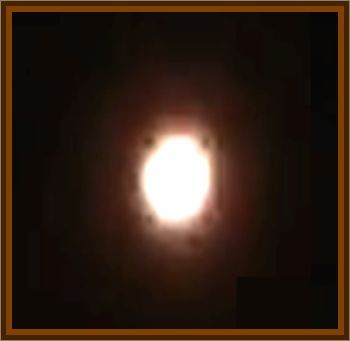 I was in a place called Ouzel Valley Park which is a beautifully quiet area of Greenland in Milton Keynes. I was at the top of a small hill sitting on a bench reading my newspaper. I finished reading and turned around to see an object floating above the trees about a quarter of a mile away. I stared at it for quite some time watching what it was doing and trying to figure out what it was. It was a black object with a white light in the center. I thought it could either be a Chinese lantern or possibly a helium balloon the type to advertise companies as it was moving back and forth very smoothly. However, it kept turning around and when it did it was perfectly flat and long, and as the closest business was several miles away and we were in a rural area with Greenland the balloon theory was looking doubtful. There was no wind, not even a gentle breeze as all the leaves on the trees were still so any type of powered aircraft could be ruled out. Shortly after I stood up and moved closer it began to rise and become smaller very quickly until it became a tiny dot and vanished into the cloud. The clouds were very low on that day.

As I was walking home a light aircraft flying low was above my head but I could not see it and the weather report that day was for low cloud and mist. Whatever the object was it was below the cloud possibly 100' maybe 200' high. I am a man in his mid-forties and level headed. I am sceptical when it comes to UFO’s as I believe that every sighting must have a rational explanation. However, I know exactly what I saw and I simply cannot explain it. It was not a balloon, a lantern or any powered object. It hovered at a constant height and moved from left to right again very smoothly for the 3 to 4 minutes I observed it before rapidly gaining height, shrinking and vanishing.