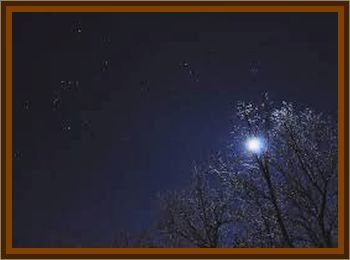 This is an old one. It was like a star that moved, it was 1952 before there was any space traffic or objects and was not an aircraft.

This was years ago, and the date I listed could be a couple weeks either way. I was 9 years old at the time. My parents were visiting my aunt and uncle and playing cards inside the house. They lived in a little four corners community about 20 miles northwest of Lansing, MI. It’s too small to be listed on maps or have its own zip code. I was out in the back yard laying on my back looking at the stars, trying to make them into pictures. As for the exact time, it was dark so was some time after 9:00 p.m. and before 11:00 p.m., which was when we left to drive home.

As I was watching the stars, one of them moved. It quickly went from one place in the sky to another and then stopped.

The route it traveled was like a large U. There were no flames, no noise, no brightening or dimming of its light, no blinking. It just moved.

It was definitely not a plane, helicopter or other type of aircraft. Even at 9 years old, I was very familiar with and had ridden in most types of aircraft, I spent many Saturday afternoons at the airport just watching and bugging the private pilots for a ride.

The movement only took one or two seconds. The object had not moved before then and did not move a second time. It looked like just a star that moved.

Remember, this is 1952. There were no satellites, space vehicles, space stations or space junk for years after I saw what I saw.

For some reason, I could not bring myself to tell my parents that night and have never mentioned it since that night. I have not seen any other unidentified flying objects since then, although I know several people who have and I have no reason to doubt them.

I just thought that I should put this on the record before it's too late.