Motorist Hits Entity With His Car 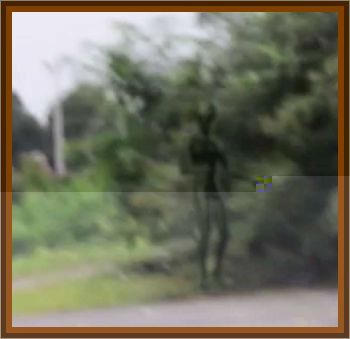 David Morris, who was 20 years old at the time, was a finish grinder at the Lamb Electric Company in Kent. He usually worked from 5:00 p.m. to 2:00 a.m. or 4:00 a.m. and on the morning in question, he left work at 2:00 a.m., drove out Rt. 5 to Marsh Road, south to Munroe Falls Road which is a short cut to his home in Munroe Falls. Since that time, however, Morris takes the long way around and refuses to drive the route anymore.

It was about 2:20 a.m. when Morris spotted an orangish-red glow off to the left and on the other side of the hill on Munroe Falls Road. He was proceeding slowly because of a thick fog which had settled over the Kent area following an electrical storm.

Upon seeing the glow, Morris said he thought it might be a house on fire, and automatically slowed his 1964 Chevrolet. He thought perhaps a house had been struck by lightning. When he topped the crest of the hill, he saw a glowing wedge or cone shaped object 80' off to the left, south of the road, in a wheat field.

It appeared to Morris to be about 25' tall and about 12' wide at the base. On top of the object where the triangular shape came to a point, was what appeared to be a ball shaped object.

Morris was blown away at the sight of the object, but was more curious than frightened. His estimated speed was about 30 miles per hour. He pulled his eyes from the object and looked back at the highway, whereupon his curiosity turned to horror. About 45' to 50' in front of his car were four or five small figures about 3½' to 4' tall with oversized heads which gave off the same orangish red glow as the object sitting in the wheat field.

He said he didn’t know if the little beings had headpieces on or not, but that their heads were abnormally large. The bodies appeared to be of stocky build and were humanoid in form. He could not distinguish any clothing or features, but had the impression that they were wearing an all encompassing piece of clothing such as a coverall.

The small figures ran very quickly back and forth across the road with much more speed and agility than Morris felt he could accomplish. They seemed to be moving purposefully from a drainage ditch on the north side of the road to the south side and back again.

At first sight of the creatures, Morris slammed on his brakes. The figures had given no indication that they were aware of him, despite his headlights, and he did not stop his car in time. He heard a thump as the right front of the auto struck one of the figures as it was crossing the road. The car traveled another 8' to 10' before he could bring it to a complete stop. Almost instinctively, Morris put his hand on the door handle to open it, but stopped. He said he had no fear that he had struck down an ordinary human, but the thought flashed through his mind: If I killed them, they’ll kill me.

He then sped away as fast as he dared to in the fog. Looking into the rear view mirror, he saw that the figures were standing in a group but could not discern whether or not one of them was lying in the road. When he reached home, Morris said, he simply sat in the living room for two hours. Then, finally having calmed down, had enough strength to climb the stairs and go to bed.

That afternoon, accompanied by a friend, he went back to the spot. The field where the coneshaped object had been seen yielded no evidence of its presence there. They did find the skid marks on the road where Morris said he slammed on his brakes and struck the figure.

But there were no footprints or other indication of the presence of the little creatures, or that one had been struck down.

The front of Morris’s car was dented in the chrome trim in three separate places and scratches were visible.

He did not notify any authorities concerning the incident, fearing ridicule. What evidence there may have been on the chrome trim was destroyed that day, because being a meticulous individualwho took good care of his car, he had washed and polished it that afternoon before going to work.

Morris got the impression that the cone shaped object was hovering 2' or 3' above the ground and that its light came from the inside, it appeared to be translucent. It did not move nor did the glow change in intensity. He saw no markings, windows or doors, nor did he hear any sound. He did recall a smell, his window was rolled part way down, resembling the odor of hot brass. He admitted that it could have come from the car, but didn’t think so.

Morris’s car was apparently not affected by the object, the lights and engine functioned perfectly.

He felt no sensation of heat, but felt cold and clammy after the experience of seeing the figures. He was sure of the presence of four figures, but said there could have been five. He could not discern that the figures were carrying anything and said that when his skidding car struck one of them, it had been running across the road. At the point of impact, he saw the figure’s hand and there were no fingers that he could see.