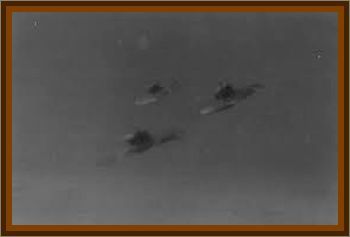 While observing the evening sky while fishing on Lake Wisconsin my eye caught a flashing in the clouds toward the West where the sun was setting. Three gold colored disks appeared out of the clouds and slowed to a stop when reaching zenith.

They appeared to be looking down at a beautiful scene below of a broad river set in a valley.

My grandfather, a friend and myself could detect a slight motion as they stood in rather tight triangular formation above us, kind of wobbling. After some 5 to 10 seconds the lead ship slowing began moving Southeast towards Madison and the others brought up the triangular formation. I would estimate their elevation at about 3,000' to 4,000' and they looked about the size of a penny at arms length.

They soon accelerated at a tremendous rate and were out of sight on the horizon within 3 to four seconds. It was a daylight sighting I will never forget.