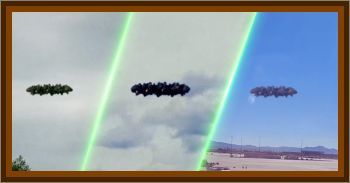 Multiple sightings of a red, glowing cigar shaped object have been reported over the hills of northwest Connecticut. Most observers have been students and faculty members of Hotchkiss School in Lakeville.

On the night of January 19 the object was photographed around 9:15 p.m. by Richard Gipstein, 17, a senior at the school. The object was moving toward the south above the hill line in the distance.

Gipstein set his camera, with telephoto lens, on a tripod and opened the shutter for five seconds. The object first appeared for just a moment. Then it reappeared, travelling on the same line and continued to grow brighter. It then grew gradually dimmer as it moved toward the south until it faded out.

The camera was a Voigtlander SLR 35 mm, and the lens was set at f8.

George hernandez, 16, a junior at the school, was the first to have reported sighting the object a week earlier. As a result nightly watches were set up and notebooks carefully kept. The object’s next appearance was on January 16 around 11:00 p.m., it moved in an erratic pattern near the horizon towards the south and southwest. The light was pulsating.

The next night was overcast but a brief sighting was reported.

On the 18th between 9:30 and 10:00 p.m., some eight persons including two teachers reported seeing the UFO in the same general position.

The following night, when a picture was taken, ten persons were reported to have seen it. Dismissing the possibility that it could be car lights, as some claimed, Gipstein pointed out that it has been seen in too many areas and been reported in a 90 degree arc of the horizon.

Besides sightings at Hotchkiss, others were reported in the area around the same time. Mrs. Peter Merson and her ll year old son of Vernon reported seeing an object with red lights which hovered in the sky on January 15.

Three North Granby residents sighted a similar object about 5:45 p.m. the same night near Granville, MA, On January 1?, Mrs. Donald Warner of Sharon observed a glowing orange oval moving low in the sky about 6:45 p.m., while driving from Lakeville to Sharon. She drew to the side of the road to observe the object for about five minutes before it disappeared. Its light did not blink and it was soundless. Reginald Baker of Indian Mountain School also sighted a glowing orange red cigar shaped object with red lights on the 24th.