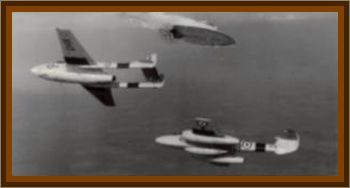 The Lakenheath/Bentwaters Incident was a series of radar and visual contacts with UFOs that took place over airbases in eastern England on the night of 13&14 August 1956, involving both RAF and USAF personnel.

The incident began at the USAF tenanted RAF Bentwaters, Suffolk.

This was a dry, largely clear night with, observers noted, an unusually large number of shooting stars, associated with the Perseid meteor shower.

At 9:30 p.m., Radar operators at the base tracked a target, appearing similar to a normal aircraft return, approaching the base from the sea at an apparent speed of several thousand miles per hour. They also tracked a group of targets moving slowly to the northeast which merged into a single very large return, several times the strength of that from a B-36, before moving off the scope to the north, as well as a further rapid target proceeding from east to west.

A T-33 trainer from the 512th Fighter Interceptor Squadron, crewed by 1st Lieutenants Charles Metz and Andrew Rowe, was directed to investigate the radar contacts, but saw nothing.

No visual sightings of the objects were made from Bentwaters in this period with the exception of a single amber star like object which was subsequently identified as probably being Mars, then low in the southeast.

At 10:55 p.m., a target was detected approaching Bentwaters from the east at a speed estimated around 2000 to 4000 m.p.h. It faded from the scope as it passed over the base, possibly suggesting anomalous propagation as a source for the target, although ground based radars almost always have a blind spot overhead, reappearing to the west. However, as it passed overhead a rapidly moving white light was observed from the ground, while the pilot of a C-47 at 4000' over Bentwaters reported that a similar light had passed beneath his aircraft. At this point, Bentwaters alerted the U.S. tenanted RAF Lakenheath base, 40 miles to the northwest, to look out for the targets.

Ground personnel at Lakenheath made visual sightings of several luminous objects, including two which arrived, made a sharp change in course, and appeared to merge before moving off. The angular size of these objects was compared to that of a golf ball at arms length, and they were stated to dwindle to pinpoint size as they moved away, an observation which seemed to rule out a bolide or bright meteor.

The final phase of the incident was described in some detail by T/Sgt. Forrest Perkins, who was the Watch Supervisor in the Lakenheath Radar Air Traffic Control centre, and who wrote directly to the Condon Committee in 1968. Perkins claimed that two RAF De Havilland Venom interceptors were scrambled and directed towards a radar target near Lakenheath.

The pilot of the first Venom achieved contact, but then found that the target manoeuvred behind him and chased the aircraft for a period of around 10 minutes despite the latter’s taking violent evasive action; Perkins characterised the pilot as getting worried, excited and also pretty scared. The second Venom was forced to return to its home station due to engine problems, Perkins stated that the target remained on their screens for a short period before leaving on a northerly heading.