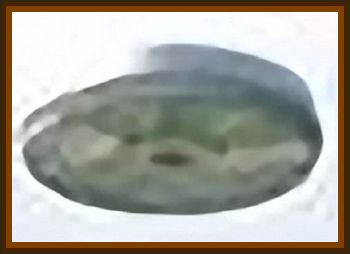 Mr. & Mrs. McMullen, Miss Sharon Burgess and 2 school students saw a mysterious object heading towards the McMullen home from a nearby hill.

The disk shaped UFO, approximately 13' in diameter and 8' high, hovered 7' above a palm tree, a 150' distance from the house.

Two occupants dressed in white, tight outfits and with headgear, were seen through its transparent dome. Prior to the incident and during the 20 minutes the saucer was present, Mr. & Mrs. McMullen noted audio and visual interference on their TV… also they complained of a smell, like ammonia, that burned their noses and eyes.

During the excitement, the McMullen’s dog knocked a hole in the screen porch in an effort to get away from the UFO.

Lakeland police were called, but the visitors had left by the time the police cruiser arrived. The case has never had an adequate solution.