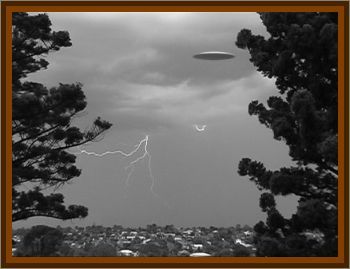 Operations Officer Captain Edward G. Denkler and 5 men of the USAF 663rd AC&W Sq saw 2 oblong, bright orange, semi-transparent objects fly at terrific speed and erratically, toward and away from each other.

At around 5:38 p.m. EST, at least 11 witnesses, including the five men from the 663rd observed elliptically shaped objects that appeared to be made of metal flying to the west at speeds estimated from hovering to 900 mph.

The actual size of the objects was estimated to be 100' to 200' long. After the visual sighting the 663rd AC&W Squadron direction center scrambled two F-86D aircraft to go after these objects. No completed intercept was accomplished.

Presumably there were sightings of these objects at Oak Ridge, TN, by 4 individuals. Lake City is approximately 20 miles north of Oak Ridge, TN. Objects were also sighted at Oak Ridge.

The 4602d AISS investigated by telephone and mailing Blue Book report forms, which they never got back. The azimuths of the objects are all over the map, ranging from 200º to 280º, with no way to know if the 4602d screwed up or made typos or whether the witnesses were confused.

One witness allegedly said the objects were 20 degs to the right of the setting or just set sun or were to the left of the sun.

The AISS commander concluded it was probably Venus but Blue Book did not agree apparently, or was asleep at the wheel under Captain Hardin, and they evidently did no investigation.

Venus and Antares were low on the horizon about 12º to 24º to the left of the sun, which set at about 5:25 p.m., Antares set at about 5:50 p.m. or near or at the end of the sighting, times all depending on exact location and height of the hill and western horizon terrain for the radar base witnesses.

The two objects were compared to a bright star and separation distance estimates yield angular separations of roughly 10º to 20º.

Captain Denkler said they disappeared by sinking below the horizon.

All the arm's length estimates are completely worthless and in general highly unreliable unless verified by on site investigation with intelligent witnesses.

Size / distance estimates yield more reliable angular sizes, which turn out to be at the limits of perception, for example, 100' at 20 miles is about 1/10 Full Moon or close to a point source star or planet, unlike the worthless half dollar or football at arm's length which would be roughly 40 to 500 times larger.

Not explained is why Venus disappeared, since it would not set until around 6:30-6:40 p.m, unless some cloud cover came in that was not noticed or properly reported.

One witness at the radar station said the objects did not move in front of or behind any cloud formations during his 4 minute sighting, but in the 4602d's sloppy reporting we can't tell if that means there were cloud formations in the sky but Lt Anderson didn't think the objects were near them.

No explanation why radar station witnesses had such disparate durations ranging from 4 to 20 minutes for the same objects seen from the same location, with start times ranging from 5:20 p.m. to 5:50 p.m., which makes it seem that some witnesses first sighted the objects after they had already disappeared to other witnesses, which apparently means some of the clock times given are in error.

Objects were described as motionless or slow moving except when moving fast, towards and away, classic atmospheric distortion of stars and planets low on the horizon.

Remember now, the low quality of the reported data is seen by analyzing the data, not just by ad hoc commentary.