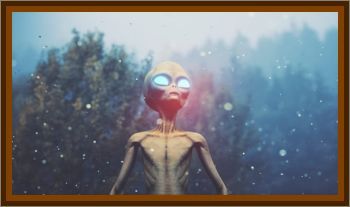 Maximiliano Iglesias Sanches was 21 at the time of his experience.

Maxi was a driver for one Aquilino Garrido Bernal in Lagunilla, Spain, and he lived in Salamanca.

At 9:30 p.m. on the 20th, Maxi drove to Pineda, completed his assignment, and went to visit his girl friend who lived there. At about 2:15 a.m., he began his return trip and had just passed the town of Horcajo, en route to Lagunilla, when he observed a powerful white light on the roadway some 2,250' or so ahead. He first thought it might have been the light of a truck or car, but as the distance between him and the light decreased to some 650', he realized something was amiss for the lights of his truck went out and the engine stopped.

It then became apparent that the light was actually a craft of some kind, appearing to be metallic in composition with no rivets, joints, seams or openings, and it stood on three round legs. The object, Maxi estimated, was 33' to 40' in diameter and the legs were by comparison very short, about 18" in height. He was certain that the object extended beyond both sides of the highway, which is some 25' wide at that point.

The object gave off a faint light which was even all over its surface, and Maxi described it as a light like nothing I have ever seen, making it difficult to describe. To the right of the object, at an altitude of some 50' to 56', was another object which was hovering motionless and gave off the same but a much weaker light.

Suddenly, to the right of the craft on the ground, two beings appeared and Maxi could not discern whether they were entering or leaving the object or, in fact, where they came from. They stood in front of the object in the center of the road and began to gesticulate with their arms. Maxi stood his ground and just looked at them and they continued to signal to him. Shortly, one of them made a half turn toward the object and disappeared to the right where he had initially made his appearance. The other remained where he was, watching Maxi, and then the first being reappeared from the right of the craft and rejoined his companion. They looked at each other and turned toward the craft, then went around the right side of the object and out of sight. A few seconds later, the object ascended, making a noise which ceased when it hovered motionless.

When questioned about the beings, Maxi said that they were between 6'4" & 6'8" tall and were dressed in tight fitting outfits that covered their entire bodies. The material was brilliant and metallic looking like the ship, and rubbery looking like the material of a diver’s suit. They walked normally and were built like human beings, although no detail of the face could be discerned because of the distance from Maxi, and the fact that the only light was the light from the ship. This may have been the reason that the entities seemed to disappear when they went to the right of the ship and out of its glow.

The ship ascended very slowly until it was parallel to the other one and the distance between them was 3½' to 6½'. At this time, Maxi felt they would let him pass so he started the truck and continued his journey.

Some 500' to 650' down the road, Maxi stopped the truck to observe the two objects. He shut off the lights and got out, at which time the illuminated ship began to land in the same place. At this juncture, Maxi decided he’d better leave and did so, rapidly.

The following morning, Maxi told friends of his experience, but no one believed him. However, when he described what had happened to him to his employer, Mr. Garrido, he believed Maxi and later told investigators that he is a hard worker, very serious and incapable of lying.

Because he had another load of material to deliver to Pineda, Maxi returned to the town on the 21st and again, visited his girl friend, telling her of his experience. She tried to convince him that he should stay in Pineda overnight because she was worried about him; however, he decided to return to Lagunilla anyway, but left at an earlier hour, 11:00 p.m.

Fifteen minutes later, and at the same spot where he’d had his experience earlier that day, he saw the same or similar objects again, only this time, there were three of them and they followed his truck until they were about 650' away, then settled to the ground in a row in a field at the side of the road. Maxi decided to observe the objects, so he turned off the engine and the light and settled down to watch.

The light from each of the crafts was faint and Maxi could not detect any changes in the intensity, and the three were separated by a distance of some 26½' to 30'. This time, there were four persons instead of two, and like the first time, the witness was not able to determine where they came from, only that they appeared and came to a position in the center of the highway in front of the crafts. They looked toward Maxi while gesticulating among themselves.

Then they signaled to Maxi and began to move in his direction, walking normally. At this point, Maxi opened the door on the right side of his truck and began to run down the road, whereupon the entities quickened their pace. He turned around several times to determine their progress and realized that the gap between him and the beings was lessening.

Maxi then dove in the ditch along the side of the road and watched as the beings drew up to his location and passed him, and then began searching for a distance of 46' to 50'. Despite the fact that they, at one point, were so close that they almost touched him, they did not find him.

When he saw them move off some distance, he took that opportunity to flee and headed toward Horcajo, the nearest town. About 1 mile from the town, he saw its lights and when he got to town, he talked to no one. After about ten minutes, he worked up enough courage to return to where his truck was parked, hoping that the ships might have left, but they were still there. The beings were nowhere in sight.

Feeling safe because the entities were not around, Maxi started toward his truck. The right hand door was closed and he distinctly remembered having left it open. Feeling apprehensive, he checked the inside of the truck before getting in. He tried to start it, but with no success. At that point, the 4 beings appeared again, walking along on the asphalt and moving toward the ship, and as before, they disappeared from sight in the vicinity of the craft.

Shortly, one of the ships began ascending, reached an altitude of 50' to 56' and then hovered motionless. Then Maxi again tried to start his truck, was successful, and drove away. After driving about 650', he stopped his truck so that he could watch what was transpiring with the crafts behind him. Despite what had happened before, he turned out the lights, got out of the truck, and walked toward the craft. Walking quietly, Maxi approached to within some 30', and looked closely at the craft closest to him, attempting to learn how the beings entered and exited. But he could find no evidence of ports or doors, the entire surface was perfectly smooth. He then saw four beings doing something on the embankment of the roadway. Two of them were holding T shaped instruments and a third held something which resembled a horseshoe. They did not speak or make any sounds and Maxi could not make out what they were doing. Neither was he able to ascertain any details of the faces as they were covered with the same smooth material which encased the rest of their bodies.

Maxi estimated that he stood there for approximately three minutes and although he was extremely curious, he decided to leave because his fear overcame any inclination to investigate further. The beings did not move toward him, indicating that they probably were unaware of his presence. He returned to the truck and without further difficulty, proceeded on his way home.

On the following day, he told his employer what had happened and was advised to report it to the Civil Guard. Investigators who returned to the scene with him found marks on the ground where the objects had landed in the field. On the highway where he said that one of the ships had landed, they discovered a gouged spot which was in the form of a straight line, the depth indicating that it had been marked by a very heavy object. On the embankment were found two marks which the investigators assumed had been made by the tools or devices which Maxi had observed during his last observation.

Nothing else was found.