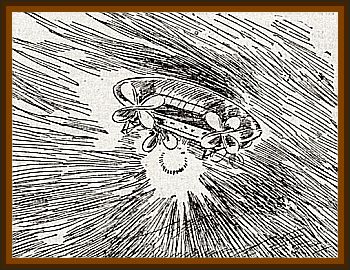 The strangest experience of my life, said a well known young man in conversation with a Journal representative last evening, came to me so unexpectedly Saturday evening that it startled me almost out of my wits for a moment.

I had been out wheeling and was on my way home. I was on the road between Stockwell and Crane, the new name the post office had assigned to Culver station, and was treading at a pretty lively pace to get home in time to make a few purchases before the stores closed.

Night had fallen and it must have been between 8:00 p.m. and 9:00 p.m. The road was deserted and the only break in the monotony of my lonely ride was the occasional glimpse of a light shining from the window of a farmhouse.

My eyes were bent on the road in front of me and my thoughts were busy with matters common to the thoughts of most young men. I was conscious of the fact that it was dark, that I was alone and that I was moving.

Beyond these conditions my mind had but little to do with the materiality of my surroundings.

All at once there was a change in my mental status. I was brought back to a realization of earthly things by an unearthly occurrence. A loud, hissing noise very similar to the escape of steam from a locomotive sounded so near me that I was startled into alertness.

I looked for a railroad and the headlight of an engine, expecting to see the latter at my elbow, but saw neither.

Before I could get the engine idea out of my mind, my hat was almost lifted from my head by the wind of an object passing over my head. I released my hold on the handlebars of my wheel and threw my hands to catch my hat. Just then my wheel struck a rock or something and I was dismounted in a trice, falling on my back on the road.

As my eyes turned upward they met a sight that made me wish I had fallen into a deep hole with a cover on it. Only a few yards away to my right in a small meadow I saw the strangest object that any mortal has ever seen.

It looked to me like a perfecto shaped cigar about 20' long and perhaps 8' in diameter at the biggest point. Beneath it was a box shaped arrangement apparently 6' by 3' in dimension.

This box or car was suspended from the cigar shaped arrangement by a network of tubular wires. The cigar shaped affair was pointing toward me and from the end there flashed a large light whose brilliancy seemed to me much more powerful than an electric light.

It was a scintillating blaze and different colors came and went with startling rapidity. It was a beautiful thing, but it hurt my eyes and besides, my nerves were so badly upset that I was hardly in a condition to appreciate the beautiful.

Two men were standing on the ground by the side of the strange object and seemed to be busy with several of the wires leading from the lower part of the queer object to the upper part. They spoke occasionally and I heard one remark:

I wonder where we are? He spoke with a foreign accent and I thought at the time that he was some French scientist.

His companion replied in excellent English and I supposed he was an American.

I was still lying on the ground on my back and the strangers had not noticed me. I was beginning to recover from my fright and my curiosity was taking its place. Convinced that I was within a few yards of the mysterious airship that has been exciting so much interest and comment, I decided to go to the men and make some inquiries.

I rose hastily to my feet, but at the first step the men saw me, lights flashed from both ends of the cigar shaped arrangement and in another instant the object was rising obliquely into the air. It rose like a thing of life and was many hundred feet high before the time elapsed that it takes me to tell it.

I watched it a moment and then rubbed my eyes to assure myself I was awake. Then I picked up my wheel, took a small pull at an amber colored fluid I had purchased at Lebanon and then I pedaled for home as fast as I could..