Large Object Floated Out Of The Sky 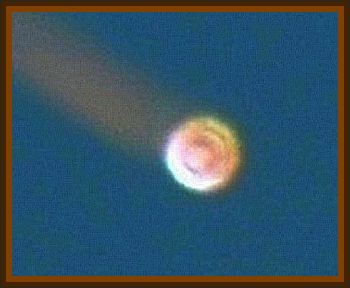 A large object floated out of the sky, to hover over a cove, emitting a strange orange/green glow, remaining for hours in Laconia NH.

Quite frequently I have checked sites looking for reports of this incident, with no results.

I was about 10 years years old, or so. It was June or July, when my Dad, ret. Navy/Coast Guard, heard a report on the local radio station, WLNH, that there was a strange event occuring over a local cove. I don't remember which area, but I do recall it not being more than 20 minutes away from the center of town where we lived. For you see my Dad grabbed his camera, said lets go, and we headed out to the area in question.

We were only able to get within a half mile, where we could see a bright orange light over the area through the woods. There was already a crowd, with many vehicles lining the road, which was blocked by police cars, inhibiting further encroachment by civilians. My Dad walked to a group to talk, as we stared at the odd glow that seemed to sink into the surroundings. The people my Dad spoke to told him we were not allowed to go any closer as the police had made statements concerning possible radiation.

A local doctor my parents knew was there,as he lived in the area, and he told my Dad that he had seen the object in question floating down from the night sky, before it took up station hovering just over the water, occasionally emitting an odd green glow from the bottom part, that was nearest the water.

We stayed for hours staring at the glow, with the rest, until the police and fire responders told everyone to leave, as the object was not, and there were concerns for our safety.

For weeks after my Dad and I went to the highest point in town, a shopping center heading out of town towards Tilton, to watch for more things floating in out of the sky. My Dad always said he had never seen any articles in the local papers at the time of the incident.

People talked about it for ages, but no information could ever be gleaned. After reading of the Guilford Police, around 1964, having not told the public to avoid a panic, I tend to think it was some other reason they were not disclosing.

I am still not seeing anything fitting the description of what my Dad and I saw. But it was real, a reliable doctor actually saw it come out of the sky, and there appears to be not record of it anywhere. I saw the glow that lit up the forest around the cove, if not the actual craft.