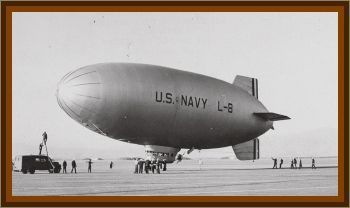 Blimps were much more common during the WWII era than they are today. Back in the 1940s, they were often used to patrol the seas for enemy submarines. In California, searching for Japanese subs was undertaken by missions directed from Moffett Field, about 25 miles south of San Francisco. Under Moffett’s umbrella, many blimps took off from and landed at a special airfield on Treasure Island, located in the San Francisco Bay.

On August 16, 1942, one of these submarine missions took off from Treasure Island with two crew members: Ernest Cody and Charles Adams. The blimp they were piloting was the L-8, which had made such missions before. Both men were experienced in these reconnaissance missions and nothing but a routine trip was expected. Aviation Machinist’s Mate 3rd class James Hill was turned away from the flight.

The L-8 circled over the spot for about an hour with the crews of two ships as witnesses.

The crew of the fishing boat, the Daisy Grey, and a Liberty ship, the Albert Gallatin. Both crews gave testimony during the inquest that was to follow.

The L-8 dropped one flare and circled over he spot attempting to use the MAD, (Magnetic Anomoly Detector), trying to detect if there was a large metal mass under the oil slick. Other than visual sightings, MAD was used to detect submarines, but had a very low rate of success. Less than a 4% success rate, MAD is a metal detector mounted in the gondola of the blimp.

Circling the spot, coming down towards the surface, the L-8 continued to circle until just after 9:00 a.m. At that point, it dropped ballast, and rising, headed back to towards San Francisco instead of continuing to the Farralone Islands, site of a radio listening post, or heading north to Reyes Point.

Having not heard back from the crew of the L8 and unable to make contact, Moffett Field sent aircraft out to search and broadcast that all aircraft in the area should be on the lookout for the L8.

At about 10:30 a.m. witnesses saw the blimp suddenly rose dramatically at a sharp angle and go up into the clouds.

About 10:50 a.m., the L8 is sighted along the coast highway. An off duty seaman driving along the highway, heading for a day at the beach, takes a picture of the L-8. The blimp is partially deflated and the seaman can tell the L-8 is behaving strangely. He and his photogragh would end up in the inquest later on.

The lettering along the center of the balloonet, "N A V Y", starts to form a V-shape, merging the A V. (Please Note, Some of the pictures of the blimp DO NOT include the "L-8" Identifier. Some Do. Why is that?

The L-8 comes in just above the sand. Two men swimming in the water attempt to control the blimp, grabbing at it's guide ropes. The blimp, too massive and being driven by the wind, rolls along the beach, unstoppable. After making it over the dunes and onto the golf course, still venting drags along the grass. The bomb on the right side of the gondola gets dislodged and drops onto the ground.

At this point, the Navy receives an anonymous call saying that the blimp has crashed onto the golf course but that they have the crew.

As trucks are dispatched from Moffet Field to the golf course for a recovery, a second anonymous call comes in saying that the airman are not aboard! This is to become one of the oddest bits of the mystery to solve.

Why would anyone call the air field and say they have the crew and then contradict themselves. I spent a long time wondering who would have been at the crash site and what motive they might have for saying the pilots were not there after-all. The answer to this was uncovered at the library at the Pensacola Naval Air Station where the restored L-8 gondola now resides.

Having been lightened by 350#, (Aviation Machinist’s Mate 3rd class James Hill, did not weigh 350#), a gust of wind lifts the partially deflated blimp into the air once more and on it's way to Daly City for the final bits of this chapter of the story.

The first person on the scene was William Morris, a volunteer fireman who lived in the house the L-8 crash-landed right in front of, and had watched the course of the blimp from his front door. Morris rushed to aid the crew which surely must be inside the gondola of the blimp, but as he approached it , he noticed something a touch unusual. "The doors were open and nobody was in the cabin."

The police and fire department follow the floating derelict until it finally comes to rest on Belleview Ave in Daly City. The bag entangled in the lines running down the street poles. The gondola comes to rest on it's back end, one 300# still attached. Rescuers find no sign of either pilot. One of the two doors is latched fully open.

Navy personnel arrive on the scene shortly thereafter and find that the engine switch is on with plenty of gas in the tanks. The secret code books on-board are intact, the parachutes, raft, guns undisturbed, and the radio and Bogen Hailer all function.

Navy trucks arrive with sailors and the blimp is trucked off hours later after photos are taken, armed guards surrounding the blimp.

The Board of Investigation is formed two days later day under Commander Francis Connell.

The board calls witnesses and Navy personal involved in the maintenance of the blimp. The board of inquiry probes for a reasonable explanation, none is available. The engines start and operate normally when tested. The radio is working normally.

In the case of an emergency, the first thing the crew would do was use the radio. The Bogen Hailer would allow the pilots to send word to any surface ships should the radio not work. Should the engines stop, free ballooning back to land is an option, dropping weight to adjust height. Should the gas envelope develop a leak, parachutes are provided. A raft is on board should the raft land in water. None of these options were taken.

Is it possible a stowaway was aboard, overpowering the crew and disposing of the bodies? Given the incident of the spies breaking into the aerodrome, the extra weight forcing the mechanic off the flight, this is a possible solution to this 'who done it'.

There is a closet size back room in the gondola and rack space over head. Did a stray bullet put a hole in the blimp gas bag, causing the deflation?

Weather was shown to not be a factor.

Witnesses from the fishing ship, Daisy Gray, and the Liberty ship, the Albert Galatin, are interviewed and give evidence that the crew was aboard, engines running, until the blimp headed back towards San Francisco. Did the blimp engage a sub crew that captured the crew?

Did the blimp dip into the water, washing the crew out to sea? Evidence shows that didn't occur.

One by one, the responses to questions bring no resolution to the mystery.

Both pilots have sterling records. Both are married. They come from the Lakehurst Naval Air Station program. Both have very recently been promoted. The co-pilot, Charles Adams had been on the USS Los Angeles and was awarded a commendation for helping put out a fire on board. He received an award from Herman Goering for his rescue efforts at the the crash of the Hindenburg. He also served on the Akron,later lost. Most notable, he served on the USS Macon at the time of her crash. Adams also served on the USS Henley and was present at the attack by the Japanese at Pearl Harbor.

The testimony considers that the crew may have fallen accidentally through the open door. This not thought possible given the locking mechanism on the doors.

Did they have a fight, one killing the other, dumping the body and then leaving? Was one a spy rendezvousing with the sub they detected? Could they have flown to investigate and been captured? Did anyone survive?

The condition of the batteries is discussed. They are drained. They are recharged and test perfectly fine. The reason for the drain is unknown but a note-worthy clue.

At the end of the inquest, the conclusion of the board is that the fate of the pilots is unknown, and that while it is speculation that they fell, there is no evidence to draw that conclusion. They are put on the missing in action rolls and in one year's time, they will be declared dead.

There are many facets to the mystery, how do two men leave a blimp over the ocean, what would force them off the blimp, why was there no radio messages back to base if they were in trouble, and what brought the blimp down are just a few.