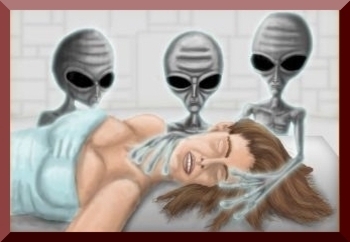 Shane Kurz experienced a series of terrifying close up encounters with a UFO outside her home. Shane recalled a very peculiar incident that occurred approximately one year before her first abduction. At that time she was in high school. One day she decided to go to school early and when she was about 50 yards from the school entrance somebody came up behind her. It was raining, and she was carrying an umbrella, and she had not seen anyone on the street prior to that. But suddenly somebody appeared behind her and said:

She turned around and saw a man walk up to her.

He struck her as being different by the fact that his appearance just didn't seem to fit with the way everyone looked around the area. His dress was a little more modern, maybe a year or 2 ahead of the current time, so she thought he was a stranger. He had on corduroy pants and a plaid shirt, but his eyes and ears were the strangest things. She was fascinated by his ears, because they seemed to come to a point and was very sharp compared to humans. Also his eyes were gray, yet when she looked at them they seemed to disappear, as if she could see completely through them. They were very magnetic. He seemed to talk with some kind of accent, but she couldn't quite place it. It sounded a little on the oriental side. His eyes were slightly slanted, not up but sort of back. His hair was light brown, and he did not wear a hat, which was unusual, because it was cold and raining, and he wore no coat either. He wore no necktie, his shirt was open, and he was about 5' 4" and came level with her shoulder. When he walked, he never took his hands out of his pockets.

Shane immediately asked how the stranger knew her name, but he evaded the question and began asking some of his own questions, all of which were somewhat strange.

He asked Shane what she did during lunch hour at school. When Shane replied that she played volleyball or basketball.

He asked her, What is volleyball and basketball?

Shane told him that everybody knows about those games, but the stranger insisted that Shane explain the games to him.

Then he asked her: During your lunch hour would you like to go for a ride?

When she replied that she didn't see any car, he pointed to a nearby field and said: Oh, my vehicle is over there, is a white vehicle.

Then came the strangest part of the encounter, as Shane says:

I sort of ended the conversation by saying, it was nice meeting you, and turned around. She thought she had taken 3 steps, he didn't follow her, she turned around just out of curiosity to see where he went, and he wasn't there. No more than 3 seconds had passed from the time she took the steps and turned around, there was no possible way he could have gotten out of her sight that quickly.

She was stunned. Shane quickly searched the whole area, but the strange man had literally disappeared. She asked some of the girls in the area if they had seen the stranger, they replied:

Who was that cute boy you were talking with?

Under regression hypnosis Ms. Kurz told of being abducted while walking through a field and being levitated into a saucer. Inside the saucer several gray aliens placed her on a table, stripped her, and rubbed a thick liquid on her. She was told that the liquid was a stimulant and that she was being tested for pregnancy with a device that was lowered on her.

Then the leader told her that they wanted to make a half with her. One of the beings quickly sexually penetrated her. He made animal sounds and a humming noise during the act. Ova samples were taken by a long needle. Kurz was then released. Shortly after this incident, which she did not remember at the time, her menstrual period stopped for a year. She had a sudden, unexplained weight loss exactly 9 months after her abduction. It was the weight loss that led her to a doctor and eventually uncover the memory of the abduction.