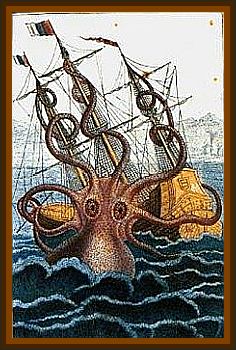 Colossal Octopus By Pierre Denys De MontfortKraken is probably a creature most people will recognize.

It's been used in several movies, like Pirates of the Caribbean & Clash of the Titans, but originally, the Kraken belongs in the cold Norwegian Sea, where it was first said to be seen in the early 1700s.

The first detailed description was made by the Danish writer and biologist, Erik Pontoppidan, in 1752. In old times, the Kraken was said to be in the shape of a huge crab, the size of an island, and many sailors and fishermen found themselves stranded on an island that had not been there minutes before.

Later descriptions tell of a monster in the shape of an enormous octopus, which dragged ships down to the bottom of the sea.