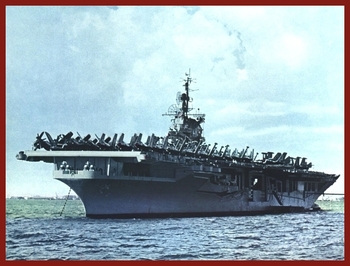 On February 2, 1952 radar operator aboard the aircraft carrier USS Philippine Sea (CV-47) picked up an unidentified high speed UFO off the east coast of Korea.

The object was first detected at a distance of 25 miles, and when it closed to 20 miles it made a wide turn to the east, opening to a course directly away from the carrier.

As excerpted from a message to the Commander Naval Forces Far East sent by the Philippine Sea, the report on the speed and unusual separation into two objects of this UFO contact stated:

3 signal observers on the deck of the Philippine Sea also sighted the UFO visually and reported independently to the bridge that they could detect 3 exhaust flames. The observers stated that the trail appeared to them as aircraft exhaust during the time the object reversed its course. However, no aircraft at that time was capable of the incredible speeds attained by the UFO and no conventional aircraft were reported in the area.

The position of the object, sighted at 17 miles from the carrier, was also held on the radar scope at that time.

The estimated altitude of the object was 52,000', and it faded from the radar scope at 110 miles. During the time it was in view, the coast of Korea and the island of Uflung Do were visible at a distance of 20 miles, and an escorting destroyer was visible on the scope 2,000 yards from the carrier.