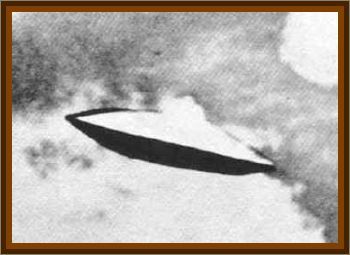 This event that I am about to relate to you is the truth, so help me God. It happened in the early Spring of 1951 in Korea. We were in the Army infantry, 25th Division, 27th Regiment, 2nd Battalion, Easy Company.

We were in what is known on the military maps as the Iron Triangle, near Chorwon.

It is night. We are located on the slopes of a mountain, below there is a Korean village. Previously we have sent our men into this village to warn the populace that we are going to bombard it with artillery. On this night, we were doing just that. We had aerial artillery bursts coming in.

We suddenly noticed on our right hand side what appeared to be a jack-o-lantern come wafting down across the mountain. And at first no one thought anything about it. So we noticed that this thing continued on down to the village to where, indeed, the artillery air bursts were exploding. It had an orange glow in the beginning. We further noticed that this object was so quick that it could get into the center of an airburst of artillery and yet remain unharmed.

The time element on this, I would say, was anywhere from, oh, 45 minutes to an hour all told.

I asked for, and received permission from Lt. Evans, our company commander at that time, to fire upon this object, which I did with an M-1 rifle with armor piercing bullets. And I did hit it. It must have been metallic because you could hear when the projectile slammed into it.

Now why would that bullet damage this craft if the artillery rounds didn't? I don't know, unless they had dropped their protective field around them, or whatever. But the object went wild, and the light was going on and off. It went off completely once, briefly. And it was moving erratically from side to side as though it might crash to the ground. Then, a sound, we had heard no sound previous to this, the sound of, like, diesel locomotives revving up. That's the way this thing sounded.

And then, we were attacked. We were swept by some form of a ray that was emitted in pulses, in waves that you could visually see only when it was aiming directly at you. That is to say, like a searchlight sweeps around and, you would see it coming at you. Now you would feel a burning, tingling sensation all over your body, as though something were penetrating you.

So the company commander, Lt. Evans, hauled us into our bunkers. We didn't know what was going to happen. We were scared. These are underground dugouts where you have peep holes to look out to fire at the enemy. So, I'm in my bunker with another man. We're peeping out at this thing.It hovered over us for a while, lit up the whole area with its light, and then I saw it shoot off at a 45º angle, that quick, just there and gone. That quick. And it was as though that was the end of it.

But, 3 days later the entire company of men had to be evacuated by ambulance. They had to cut roads in there and haul them out. They were too weak to walk. They had dysentery. Then subsequently, when the doctors did see them, they had an extremely high white blood cell count which the doctors could not account for.

Now in the military, especially the Army, each day you file a company report. We had a confab about that. Do we file it in the report or not? And the consensus was No. Because they'd lock every one of us up and think we were crazy. At that time, no such thing as a UFO had ever been heard of, and we didn't know what it was.