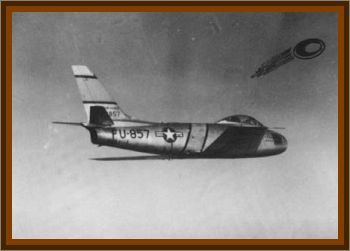 Several U.S. soldiers saw a bright UFO that looked like a falling star,except that it stopped falling and began to climb again.

It then moved northeast at about 150 MPH, reversed course twice,then climbed at a 45° angle and faded from sight.

One guard reported a pulsating sound from the object.

An Air Intelligence Information Report stated that an F-94 attempted to intercept this object. The pilot described it as round,of unknown size, brilliant white and leaving no exhaust.

It undertook clearly evasive maneuvers and pulled away from the F-94 at 30,000'.

According to this intelligence report: The object possessed a superior speed,superior climbing ability,and was able to turn equally as well as the F-94.

First the object was sighted by ground witnesses. The pilot of a F-94 tracked on his radar and saw a round brilliant bluish white light.

According to the pilot's statement: On May 31st, 1952, the F-94 descended in a port turn to intercept an unidentifed object 6,000' below on a 90° turn course and an altitude of 8,000'. The UFO began a port climb at the same time to intercept the descending F-94 and accomplished a maneuver which silhouetted the F-94 against the light of dawn. The F-94 turned on afterburner and tried two quartering head on passes with the UFO resulting in neither being able to get astern of the other. The pilot's maneuvers ensued to 3,000' where more passes were exchanged for a few minutes. The UFO then increased his speed to an estimated 460 MPH on a 45° heading and began pulling away from the F-94. When last seen, the UFO had seemingly increased his speed to approximately 518 MPH where upon the F-94 gave up pursuit at 3:55 and returned to base.