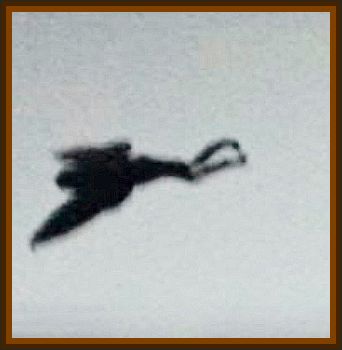 2 witnesses encountered strange flying figure in Koniecko in northern part of Poland. The tall, long haired being was flying in a unusual position in close vicinity of the terrified witnesses.

The observation was accompanied by strange, loud rumble coming out of the forest…

The being was well visible. It was flying with face turned to us. It was long haired and about 5' to 6' 5" in height. It flew over the road and then disappeared in the branches, Mariusz G. describes the being that he encountered at autumn night in 2000.

Mariusz G. is 24 year old paramedic working in a hospital in Olsztyn, a capital city of Warminsko-Mazurskie Wojewodztwo in northern Poland. He is also studying in Gdansk. In 2007 he decided to relate his encounter with weird flying humanoid that took place in 2000 to Mr. Michal Kusnierz, a member of Polish UFO reporting and researching group NPN.

It was one of many evenings when I was returning from my buddy in Koniecko, located about 4 miles away from Lidzbark Warminski. There used to be a whole crowd of us there, we used to visit him in free time.

About the midway between the city and this village there is a valley with 2 sharp curves surrounded with small forest. At that night I was traveling with my colleague. It was late autumn but there were no snow around. It was about 11:00 p.m.

“We were returning by bikes. We were talking, as I can remember, about our colleague who opened a gym in his cellar. We found ourselves on a straight path nearing the mentioned valley. Although it was late the Moon enlightened all around.

“After about 230' to 300' something urged me to look right. We were pedaling slowly, when suddenly a figure flying along the forest rim appeared. It was very well visible! It was flying with its face turned to us. Then we stopped. My colleague without resistance threw the bicycle away and began to flee away, as every normal man in similar situation.

Personally, I don’t believe in ghosts and I was never interested with similar matters therefore I began to search for some rational explanation. With my heart in my mouth for several or dozen of seconds I remained focused on this extraordinary event.

To my fear I could hear terrifying sounds coming out of the forest. It was a loud band and I find it difficult to compare it to anything.