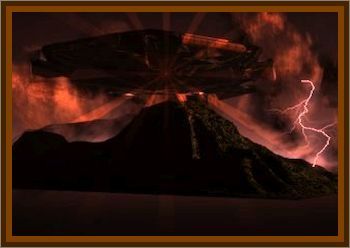 Several Kodiakans saw something fall from the sky, that may have landed in mountainous terrain on Kodiak Island. The incident prompted 911 calls and a helicopter search was launched from USCG Air Station Kodiak, but no crash site was found.

The pre-dawn light show happened about 6:45 a.m. and could be seen from several places on Kodiak Island. Some described a light moving across the sky toward the Gulf of Alaska. Others saw an explosion and red tracers. The light was bright enough to be seen from Kodiak city and Chiniak, about 20 miles away across Chiniak Bay. State Troopers also reported sightings at about the same time on the Kenai Peninsula.

We got to watch it for a few seconds before it went behind the mountains, I saw a ball of red with streamers of red flames behind it, one person stated.

We saw the light while driving to Kodiak from their home on Anton Larsen Road. We were convinced they had just seen an aircraft crash in the mountains above the road, We drove over the roads summit to where she could get a cell phone connection and placed a 911 call, Was another report.

About 20 miles away in Chiniak, another witness saw a light outside her window. It was so bright, she at first thought it might be a helicopter searchlight. But didn’t hear rotors though, and believes she caught a glimpse of a very bright meteor, It was traveling west to east and went behind a tree.

Kodiak Police Chief saw the light while on his way home from a morning workout. I was headed home from the gym and I saw flashes in the sky that looked like lightning, and I was trying to figure out what it was.

Kodiak police dispatch contacted fire departments on the Coast Guard Base and in Womens Bay. Rescue workers assembled at a mountain chalet on Anton Larsen Road while a Coast Guard HH-60 Jayhawk helicopter focused on an area north of the road where witnesses directed the search. The flights turned up nothing.

They did a low-altitude flyover, looking for any signs of fire or pitting, then a higher-altitude flyover and still did not see anything, Petty Officer 3rd Class Richard Brahm said. No emergency distress signals were received that coincided with the sightings.

Authorities have accounted for Kodiak-based aircraft and known flight plans in the area. Alaska State Troopers went further, trying to confirm from space agencies if a satellite had gone missing. Troopers in Kodiak specifically contacted authorities in charge of YES-2, an experimental satellite that reportedly malfunctioned.

We do not have anyone saying they have a missing satellite, but that doesn’t mean there is not one out there. It's still a mystery, but the good thing is that we know it is not a plane.