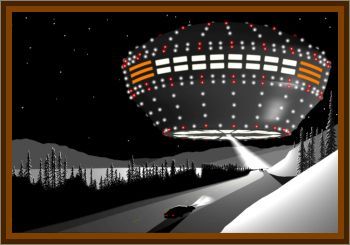 Two cousins were traveling in separate vehicles from Whitehorse to Carmacks, northbound on the Klondike Highway, which ran parallel to Fox Lake, when they saw a UFO over the frozen waters of the lake.

Seeing the object was such a shock, that they both came to an abrupt stop, about ¼ of a mile apart. One of the men left his car to get a better look at the UFO, as it slowly moved toward him, eventually being almost directly above him. His cousin stood watching the object and his cousin as it eventually crossed the highway and disappeared behind a hill.

About the same time of the two cousins' sighting, two other witnesses were nearing the southern tip of Fox Lake, also traveling northbound. They both observed rows of lights moving across Fox Lake. They thought at first it could be a large truck, but being over the lake, they dismissed that idea, and then they thought maybe a large plane about to crash, but that too was discounted because the object was moving so slowly. It was a UFO.

Soon, the second set of witnesses passed by the two cousins, who were off the side of the road, and looking into the sky. They turned around, and went back to talk to the cousins. After a short discussion about the UFO, the second set of witnesses drove off and eventually came to the Braeburn Lodge, about twenty miles north of the cousins. Steve Watson, the lodge owner immediately told the two witnesses about another witness who had seen the UFO.

The witness from Braeburn Lodge had been driving along the lake when he saw a light in the distance, which was out of place. As he got closer to the light, he could see that it was lighting up a long, smooth surface. After a moment or two, he looked again, but the light was gone. But he did see a group of rectangular lights moving behind a hill to his east. He sped up to reach a place more advantageous to see the UFO, but when he arrived, the object was not visible. He later made a drawing of what he had seen, and told Steve Watson.

The cousins would soon tell their story to the lodge owner. Also a sixth witness would come forward who had seen a large array of lights. The proximity to the lights affected her car's performance. Between 8:30 p.m. and 9:00 p.m., the Village of Pelly Crossing was also being visited. One witness, about two hours drive north of Fox Lake, saw a row of lights moving over the hills. The object was about 300 yards ahead of him and he had to turn his head from side to side to see the immense size of the UFO.

Two more witnesses would come forward also. Traveling just south of Pelly Crossing, they saw to the north a large row of lights slowly moving. They pulled into a gravel pit to get a better look. One of the witnesses could see the Big Dipper, and stated that the object was about the same length. Also, four women attending an evening course at a community college saw the huge row of lights when they were outside taking a break. They stated that the object was huge, and made not a sound. They watched it move slowly out of view, disappearing behind a hill.

Near the Village of Carmacks nine additional witnesses would see the object. Four men saw the UFO as they rode in a pick-up truck just south of Carmacks. A husband, wife, and three children who were watching television spotted a row of lights through their window. The four men stopped near a landfill and saw the UFO move toward the northeast, curve toward the south, and move close to a microwave tower south of the village. There it just disappeared. The family saw the lights moving just above the tree line. The lights shut off one at a time right before their eyes, as if going through an invisible wall.

With over 30 known adult witnesses, the Klondike Highway encounter is rich in credibility. The only unfortunate thing about the series of sightings is that no photographs were taken of the large UFO.