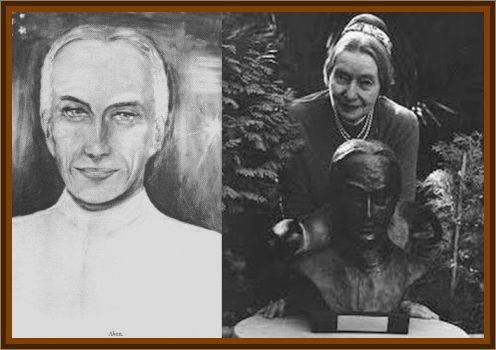 Elizabeth Klarer was the most prominent flying saucer contactee of the 1950's from South Africa. Elizabeth was born in 1910 and rose out of obscurity in 1956, following an encounter with a spaceship reputedly from Alpha Centauri, of which she took a picture, and was received enthusiastically among South African UFO buffs who provided her with a platform to recount her encounters.

As her story unfolded, she claimed to have had her initial sighting in 1917, a 2nd in 1937. Finally, in 1954, while at her farm in Natal she saw a saucer again. This time it flew close enough that she could see one of its occupants. On April 6, 1956, a saucer landed and she was taken aboard. The fair haired and handsome person she had seen before introduced himself as Akon. The saucer took her to a large mother ship, where she was shown pictures of Meton, Akons home planet. She was fed a vegetarian meal, and introduced to their culture. Two months later she saw the saucer again and took a picture of it as it flew above her farm.

She told this story at UFO gatherings in South Africa, and over the years reported additional contacts. The most important event in these later encounters was her developing romantic attachment to Akon, with whom she had a son. She claimed that at one point she stayed 4 months on Meton and completed her pregnancy there. Her son could not live on Earth, but occasionally visited her. All of these events were discussed in her 1980 book, Beyond the Light Barrier. Although warmly received in South Africa, her story was not believed by North American or European UFO researchers. Except for the picture, there was nothing to collaborate her story. She persisted in her claims, however, until her death in February of 1994.