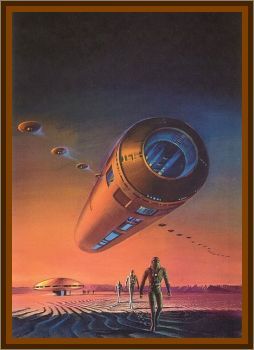 On the morning of August 9, 1980, three Security Policemen, SSGT Stephen Ferenz, Area Supervisor, ATC Martin W. Rist & Airman Anthony D. Frazier, at the Manzano Weapons Storage Area, adjacent to Kirtland AFB, sighted an unidentified light in the air that traveled from North to South over the Coyote Canyon area of the Department of Defense Restricted Test Range on Kirtland AFB, NM. A 4th guard observed a disk shaped light in the vicinity of a bunker used to store nuclear weapons.

The 3 were interviewed separately, and all three related the same statement; at approximately 11:50 p.m., while on duty in Charlie Sector, East Side of Manzano, the three observed a very bright light in the sky approximately 3 miles North North East of their position. The light traveled with great speed and stopped suddenly in the sky over Coyote Canyon. The three first thought the object was a helicopter, however, after observing the strange aerial maneuvers, stop and go, they felt a helicopter couldn't have performed such skills. The light landed in the Coyote Canyon area. Sometime later, three witnessed the light take off and leave proceeding straight up at a high speed and disappear.

Central Security Control, CSC, inside Manzano, contacted Sandia Security, who conducts frequent building checks on two alarmed structures in area. They advised that a patrol was already in the area and would investigate.

On Aug. 11, 1980, Russ Curtis, Sandia Security, advised that on Aug. 9, 1980, a Sandia Security Guard, who wishes his name not be divulged for fear of harassment, related the following:

At approximately 12:20 a.m., he was driving east on the Coyote Canyon access road on a routine building check of an alarmed structure. As he approached the structure he observed a bright light near the ground behind the structure. He also observed an object which he first thought was a helicopter. But after driving closer, he observed a round disk shaped object. He attempted to radio for a backup patrol, but his radio would not work. As he approached the object on foot, armed with a shotgun, the object took off in a vertical direction at a high rate of speed. The guard was a former helicopter mechanic in the U.S. Army and stated the object he observed was not a helicopter.

A source advised on Aug. 22, 1980, three other security policemen observed the same aerial phenomena described by the first three. Again the object landed in Coyote Canyon. They did not see the object take off.

Coyote Canyon is part of a large restricted test range used by the Air Force Weapons Laboratory, Sandia Laboratories, Defense Nuclear Agency and the Department of Energy. The range was formerly patrolled by Sandia Security, however, they only conduct building checks there now.

All the agencies who utilized the test range and it was learned no aerial tests are conducted in the Coyote Canyon area. Only ground test are conducted.

On Sept. 8, 1980, it was learned from Sandia Security that another security guard observed a object land near an alarmed structure sometime during the first week of August, but did not report it until just recently for fear of harassment.

On Aug. 13, 1980, 1960 COMM Sq Maintenance Officer reported Radar Approach Control equipment and scanner radar inoperative due to high frequency jamming from an unknown cause. Total blackout of entire radar approach system to include Albuquerque Airport was in effect between 4:30 p.m. - 10:15 p.m. Radar Approach Control back up system also were inoperative. At 10:16 p.m., all radar equipment returned to normal operation without further incident.

On Aug. 13, 1980, Defense Nuclear Agency Radio Frequency Monitors determined, by vector analysis, the interference was being sent from an area V-90°, or due East. On DAF map coordinates E-28.6. The area was located NW of Coyote Canyon Test area. It was first thought that Sandia Laboratory, which utilizes the test range was responsible. However, after a careful check, it was later determined that no test were being conducted in the canyon area. Department of Energy, Air Force Weapons Laboratory and DNA were contacted but assured that their agencies were not responsible.

On Aug. 13, 1980, Base Security Police conducted a physical check of the area but because of the mountainous terrain, a thorough check could not be completed at that time. A later foot search failed to disclose anything that could have caused the interference.

The presence of hostile intelligence jamming cannot be ruled out. Although no evidence would suggest this, the method has been used in the past. Communication maintenance specialists cannot explain how such interference could cause the radar equipment to become totally inoperative. Neither could they suggest the type or range of the interference signal. DNA frequency monitors reported the interference beam was wide spread and a type unknown to their electronical equipment. Further checks of the area was being conducted by Technical Services, AFOSI.