Incident In The Forest 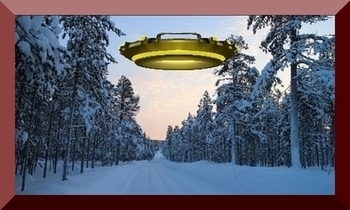 As the snow continued to fall well into the late afternoon of February, lumberjacks Petter Aliranta & Esko Sneck finally decided they were done for the day and began to pack up their equipment. It was only a little after 3:00 p.m., but the sky was a gloomy white and the snow showed no signs of abating.

As Aliranta turned off his industrial style chainsaw, he noticed a metallic object hovering just above the trees.

The object was like two saucers on top of each other, with what appeared to be four legs on its underside. It began to descend towards the forest floor. As it did so, a circular window or doorway opened on the bottom of the craft. It continued downwards, seemingly coming to a stop in a small clearing around 50' in front of them.

The lumberjack continued to watch the scene as his partner finished his last cut of the day and was unaware of the bizarre event unfolding behind him. From the circular gap, a 3' humanoid creature, dressed in a one piece green outfit emerged. The creature appeared to be wearing a helmet with a faceplate, similar to a scuba divers facemask. As soon as the creature touched down in the snow covered forest floor, it began to make its way towards the two men.

The movements of the creature were similar to an astronaut’s motions on the moon as it appeared to jump or hop towards them. At this moment, Aliranta flicked the switch on his chainsaw. This, it seemed, alerted his fellow lumberjack, who looked up to see the bizarre entity heading in their direction.

For reasons he couldn’t later explain, Sneck advanced towards the humanoid, his chainsaw still switched on, held out in front of him as if ready to attack. The creature continued on several more feet until finally it turned and headed back towards the saucer like craft.

Aliranta moved forward now also, joining Sneck as he advanced towards the craft. As each man got closer to the cosmic vehicle, they could see several other humanoid creatures inside. The craft suddenly began to hover slightly above the ground as if expecting the arrival of the creature. Aliranta lunged forward and grabbed the heel of the strange figure in an effort to stop it boarding. When he did so, however, a jolt of pure pain, like hot iron entered his hand.

According to reports in local newspapers at the time, the wound would remain volatile for several months.

Needless to say, he let go of the creature, who then motioned itself upwards and into the craft. Gusts of air began to swirl around the clearing as the craft began its rapid ascent. Within a matter of seconds, it had vanished. There were several markings in the snow following the craft’s disappearance, but nothing else remained of the visitor’s presence. Each of the men suffered a mild form of paralysis in the minutes following the encounter and would not be able to leave for around an hour.

The incident would attract the attention of both national and international media, as well as numerous UFO investigators over the years.