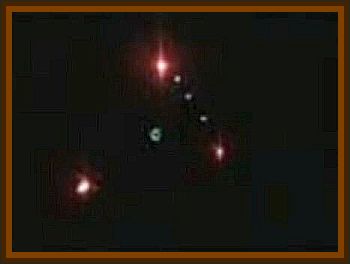 I was driving north on Hwy. #15 near Kingston Mills Road.

It was a cold still night, and I was singing along to a cassette of the Mamas and the Papas on my car stereo. I just passed over Stephentown Creek Road, when something in the sky caught my eye.

Ahead of me and to the right, just above the tree line, I saw 2 round white lights. They were much bigger than any stars and they appeared to be coming towards me in a southwest direction.

I checked my car mirrors to see if any other vehicles were on the highway.

There weren’t any, and I immediately slowed my car down to about 10 mph. As the 2 lights approached it looked like big bus headlights in the sky. I thought to myself:

What kind of a plane or helicopter has 2 white lights like that?

The object was flying slowly and just over the treeline, approximately 2 or 3 telephone poles high. I quickly checked for traffic again, and then flicked on the high beams of my car, because I thought it might help me get a better look at this thing. I didn’t stop the car, but I was driving so slowly I was barely moving. I couldn’t believe my eyes, it was a black equilateral triangle right ahead of me above the road. The triangle was exactly even and equal in length on all three sides and each of the 3 angles.

There was a large white dome light steadily glowing at each of the 3 points. Each of these round dome lights were about the size of a half volleyball. None of the lights were actually shining a beam of light on anything, or even casting a radiant light for that matter. I could no longer see the red blinking lights at all, and I wasn’t sure if these glowing dome lights were the same lights as the headlights or not.

I quickly put my window down and stuck my head out. As it passed over my car I got a very good look at the bottom of the craft. It was flying point first towards the Kingston Mills Locks area. The black triangle was actually very dark grey and almost shadow like above a very distinct 3 Dimensional black shape directly attached to and under the triangle. It looked like something out of a Star Trek movie. It actually had arrow like points at each of the 3 corners. After the point, the shape made something like a small inward rectangle, then outward to a larger rectangle shape, back to a small inward rectangle, and then to the next point. Each side was exactly symmetrical to itself and to each other side. It struck me how slowly it was moving, maybe 25 mph, how low it was, and how small it was, it would easily fit in a school gymnasium.

The next thing that crossed my mind was that perhaps it was some sort of military stealth like plane. I thought whoever that is, is so close they can probably hear Dream a little Dream, playing on my stereo. I considered turning the radio off, but I didn’t bother. Maybe it would draw their attention to me, then another thought crossed my mind, would that be a good thing or a bad thing? What about a real UFO, and possible abduction? I didn’t feel scared, though, especially since none of those stereotypical things happened to my car. No stalling, or dimming of lights, or weird radio noise.

I noticed 2 sets of car headlights coming towards me from around the next corner of the highway. I thought, Good, those people have got to be able to see this thing too. I felt better that I probably wasn’t alone in the sighting and I just continued around the corner.

The strange craft never stopped or hovered, just continued slowly on its course towards the area of Kingston Mills Locks. I did not see the craft from behind. I looked at the clock in my car, and it read 6:21. Since my clock is set exactly 8 minutes fast, it would actually have been 6:13 pm. I noticed the next street sign that read Isle of Man Road. The whole incident probably lasted less than 2 minutes.