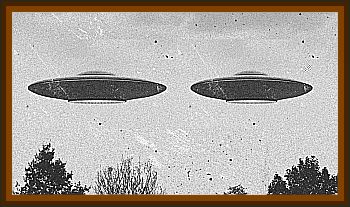 Two silver disks, side by side, moving from place to place simultaneously.

When they moved from one location to the other they disappeared until they materialized at the other location. The movement gave the impression of darting from here to there.

There were two objects that moved simultaneously. Silver disks that appeared to wobble slightly while stationary. They were under the clouds so they could not have been higher than 1000'.

When they moved from one location to the other they were not visible until they appeared in the other location.