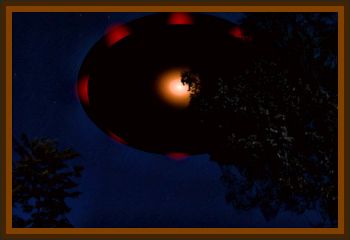 In the late summer of 1960, a group of youngsters, myself included, had finished dinner and were playing a game of hide and seek in the neighborhood.

The Sun had just set, but the sky still had a warm orange glow. We played for some time and finally it was my chance to be it, the one who counted then went to find the others in their hiding places.

I recall that I couldn't count to 50, so I counted to 10 five times. I was leaning on a tree in the side yard of our house.

By then it was pretty dark and I felt compelled to look up. As I did so, I observed the leading edge of a circular object emerge from over top of our house.

I was transfixed: I just stood there speechless and stared at it. It was bigger than our house and perfectly round. I assume it was a disk and I was observing the bottom of the craft.

It was uniformly a brilliant red/orange. There were no external marking, windows, lights, or construction details. Just what appeared to be a self illuminated object.

It was perfectly silent, which added to the drama. As soon as it dawned on me that I was seeing something extraordinary, I was filled with the strange sensation that it, or they, had seen me, too.

I ran into the house to get one of my parents. My mother was finishing up the dishes, but she came outside to see it.

It was no longer visible.

We looked in the direction of the sunset and the sky was almost the same red/orange of the craft. This has made me wonder if the craft was reflecting the sunlight or glowing on its own.

None of the other children saw it and my mother commented that I'd seen a falling star before returning to the kitchen.

I knew I had not seen a falling star. I was always nervous that whoever was responsible for that craft knew I saw it and might someday return.

In the years following this incident, I have had many occurences which can only best be described as psychic. I've had lucid dream and numerous sleep walking episodes, once even going into the front yard of my grandmother's house and staring at the eastern horizon, only to see the moon rise just at that moment.

My entire family and I observed a spherical craft while on a drive one evening in Greene County, TN.

I discovered in a casual conversation one day that 2 of my 3 brothers had also seen spherical craft during their lives, in the exact same neighborhood where we lived when I had the episode mentioned above.

We believe in the reality of the experience, but have no conclusion about the exact nature of the phenomenon.