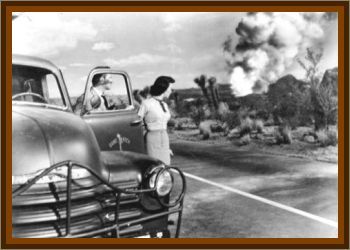 A UFO is alleged to have crashed 8.1 miles NW of Kingman AFB, now Kingman airport. The original reference for a UFO crash occurring in the vicinity of Kingman came from an article published in the Farmington, Massachusetts edition of the Middlesex News published on April 23rd, 1973. Additionally, through the efforts of Raymond Fowler, an alleged member of the official U.S.A.F. investigation team was identified and interviewed. Pseudonym Fritz Werner,l actual name Arthur Stanzel, by Fowler. This unique eyewitness to the recovery operation signed an affidavit which contained the following statement:

I Fritz Werner, do solemnly swear that during a special assignment with the U.S.A.F. on May 21, 1953, I assisted in the investigation of a crashed unknown object in the vicinity of Kingman Arizona.

The craft was said to have a brushed aluminum exterior finish, and measured approximately 30' in diameter. Two swivel seats were reported to have been found inside the craft, along with instruments and display panels. A single hatch which was found to be open on the craft, it measured 5' high, and 3' wide. Additional reports from Majic Eyes Only, written by Ryan S. Wood, indicate that the craft was embedded 20” into the desert sand on impact.

A discrepancy exists regarding the configuration of the craft, due to the fact that some reports indicate that it may have been oval or cigar shaped. 4 small extraterrestrial bodies with a dark complexion, measuring approximately 4' in height are believed to have been recovered at the crash site. 3 of these EBEs, Extraterrestrial Biological Entities, were reported to have been transferred to a secure YY-II facility at Los Alamos National Laboratory. The remaining occupant, known as J-Rod, was later sent to Area S-4, South of Area 51. However, according to Raymond Fowlers witness, only one deceased entity, who was wearing a silvery one piece flight suit, was recovered at the crash site. This represents another example of how sketchy details in the murky business of UFO crash retrieval research can lead to conflicting reports, leaving solid evidence to support such claims difficult to obtain. However, a letter in the Wendelle Stevens collection written by investigator Timothy Cooper to UFO researcher William Steinman, delivered through Stevens, dated December 18th 1990, may provide additional confirmation.

Although 3rd hand in nature, this letter mentions the existence of a military blockade along highway 40, possibly during the year of 1953. Also note the curious statement from the eyewitness, that even the desert roads were sealed off. Why would the U.S. military deem it necessary to seal off a major highway passing directly through Kingman? Why not just transport sensitive material during night time hours? These actions by the military would seem to support a rapid-response program designed to secure the area leading to and from a potential UFO crash site. Any remaining debris would immediately need to be recovered regardless of the time of day.

Have elements of the military recovered objects of extraterrestrial origin, and transported them to clandestine hangars somewhere in the Southwest? It’s interesting to note that highway 40 connects directly to highway 93. Researchers will instantly recognize the fact that highway 93 leads North through Las Vegas, and directly into Area 51. For decades, reports have surfaced of crashed disks being housed at a Top Secret facility known as Area S-4, 12 miles South of Area 51. Specific detailed accounts from Wendelle Stevens indicate that the disk that crashed near Kingman was transported to Area 51 via U.S. Army M25 40 ton tank transporter. Attempts were made by the recovery crew to tilt the craft on end to facilitate transportation across the country. However, this procedure was abandoned when it quickly became apparent that tilting the craft was impossible. Due to the oversized load of the disk on the trailer of the tank transporter, telephone poles had to be removed when the main road intersected with unimproved surfaces or dirt roads. Kingman is by no means the only location of alleged extraterrestrial crash retrieval operations. Additional crashes have been reported to have occurred at these locations.

Curiously, Leonard Stringfield, who reopened the case for crash retrievals, mentioned testimony he had gotten from a Naval Intelligence Officer who had seen bodies from a crash that occurred in the Arizona desert in 1953. He viewed the bodies at Wright-Patterson when the crates arrived at night aboard a DC-7. There were five crates in all, three of which contained little humanoids about 4' tall. Their heads were hairless and disproportionately large with skin that looked brown under the hangar lights. They were wearing tight fitting dark suits.

A final piece of tantalizing evidence came from retired mechanical engineer Bill Uhouse, who claimed he was part of a Top Secret program to design and build flight simulators which were used to teach American test pilots how to control flying saucers. Apparently, according to Uhouse, the origin for this program came from the UFO crash at Kingman, which was a crash of an Ebans/Ebens aerial craft near Kingman, Arizona in 1953 and that four entities survived, two disabled Ebens and two more that were in good condition were retrieved by U. S.government units specially trained for retrieval missions, the recovery crew that entered the craft to inspect it came down with a mysterious sickness.

The two non humans in good condition were allowed to re enter the craft, where it appeared they were trying to contact their home planet, or maybe another craft in the area. Afterwards, they and the 2 disabled entities were taken to an unspecified medical facility.

The craft was then loaded aboard a U.S. Army M25 40 ton tank transporter, and hauled off to Area 51, north of Las Vegas.

Attempts were made by the recovery crew to tilt the craft on end to facilitate transportation across the country. However, this procedure was abandoned when it quickly became apparent that tilting the craft was impossible.

Some implied that Ebans/Ebens also were a class of EBEs with certain distinct physical characteristics and were said to be working with our military scientists and engineers on various projects. According to BJ, no language interface with the EBE existed in 1953, so a series of symbols were shown to test his reactions. Some symbols looked like letters and others were geometric shapes. The first symbol the EBEN pointed to looked like a J. The other was an inertial-bar that looked like a rod. So, humans called the Eben J-Rod.