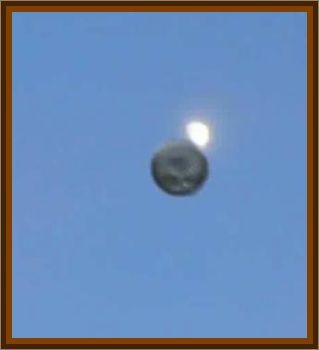 Two control tower operators, a weather forecaster and a weather observer, saw a round object, like polished aluminum, fly straight and level.

The first sighting was made by the Duty Dispatcher of Base Operations who was outside the weather station at the time. He observed

The bright, round object, which he described as strong sunlight on a bright object, and shiny like polished aluminum, at 170º azimuth, 50º elevation, moving straight and level westward against the wind.

He then called the weather observer who also saw the object. Next, he called the forecaster and he observed the object as well.

The Control Tower & Operations were notified and they observed the object with 7 x 50 binoculars, and described it as about the size of a pea at arm's length.