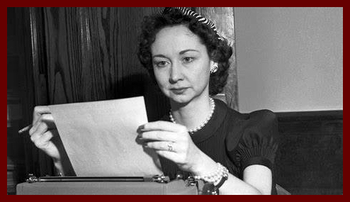 Did she know something about the JFK assassination?

Dorothy Kilgallen was a journalist and a professional celebrity who reported on a number of subjects, one of them being the Kennedy assassination. Unfortunately for her she was also an alcoholic who frequently mixed barbiturates with alcohol, especially before she went to sleep.

One night in 1965 she did this and she died of respiratory depression as a result.

Because the cause of her death was downplayed, because her family wanted their privacy, understandably, and because the various series of nonsensical explanations that became the Kennedy assassination conspiracies were starting to heat up, an unfortunate tragedy began to be morphed into perhaps a murder.

As time has passed and more exaggerations and outright lies were heaped onto the pile, Kilgallen’s death by misadventure was transformed into an attempt to somehow silence her.

Kilgallen made a huge mistake and she died as a result. It had nothing to do with the Kennedy assassination as it could have occurred at any time due to her carelessness.

2020 marks the 55th anniversary year since Dorothy Kilgallen died. Born in the Midwest, she became an internationally successful newspaper reporter based in New York. Her Voice of Broadway column was syndicated in papers nationwide, and titillated readers with the latest gossip about celebrities.

She also was a shrewd, erudite and witty panelist on the popular CBS Sunday night television game show, What's My Line?, which remains an extremely popular program among its fans even today, and can still be seen on YouTube and elsewhere online.

Besides all this, Dorothy was a no nonsense, tough, uncompromising, aggressive and fearless reporter whose stories about major news events were splashed across the front pages of the nation's newspapers. She scored many scoops over other media.

A true representative of the people, she felt the public had a right to know the truth, wherever it may lead. She covered famous murder trials, none more historic than having scored the only interview with Jack Ruby, the killer of Lee Harvey Oswald, the accused killer of President John Kennedy.

Dorothy was one of the very few American journalists who immediately assailed the investigation into the death of the President, and scored a world exclusive when she obtained an advance copy of the Warren Commission's controversial report, which infuriated President Lyndon Johnson, who had not yet even seen it.

She proceeded to publicly challenge its numerous gaps, contradictions and outright lies. Ms. Kilgallen also launched a private inquiry which took her to New Orleans and resulted in her drawing the scrutiny, and scorn, of FBI director J. Edgar Hoover and LBJ.

FBI agents were even dispatched to her private residence in New York to interrogate her, but she said she’d rather die than reveal her source(s). She soon did just that.

For many years, agencies of the federal government like the CIA and FBI followed Dorothy and her friends, as is well documented in declassified files. Her phones were tapped and she had to arrange clandestine meetings with sources, hoping that her various subterfuges would keep her safe. Near the end of her life, she very much felt she was in danger, and she was.

In November 1965, she succumbed to a combination of alcohol and barbiturates, in a fashion much like Marilyn Monroe, whose death Dorothy had also publicly questioned. As revealed in an investigative article that took months to assemble, and relied on eyewitnesses and other sources who were never interviewed by authorities, the death of Dorothy Kilgallen was a true scandal, most likely tied into her unrelenting probe into the death of JFK.

We talk about a much younger, and rather mysterious man, who befriended her in the months leading up to her death. We explain why just a day or so before she died, Dorothy discussed with her hairdresser her belief that someone close to her was a snitch, who was watching her closely and feeding information to people who wished to do her harm.

Though Kilgallen and Frank Sinatra were fairly good friends for several years and were photographed rehearsing in a radio studio for a 1948 broadcast, they had a falling out after she wrote a multipart 1956 front page feature story titled: The Frank Sinatra Story.

In addition to the New York Journal-American, Hearst owned newspapers across the United States ran the story. Thereafter Sinatra made derogatory comments about Kilgallen's physical appearance to his audiences at nightclubs in New York and Las Vegas, though he stopped short of mentioning her name on television or during interviews for magazines and newspapers.

Kilgallen covered the 1954 murder trial of Sam Sheppard, a doctor convicted of killing his wife at their home in the Cleveland suburb of Bay Village.

The New York Journal-American carried the banner front page headline that Kilgallen was astounded by the guilty verdict because of what she argued were serious flaws in the prosecution's case.

At the time of the Cleveland jury's guilty verdict in December 1954, Kilgallen's sharp criticism of it was controversial and a Cleveland newspaper dropped her column in response. Her articles and columns in 1954 did not reveal all she had witnessed in the Cuyahoga County Court of Common Pleas.

9 years after the verdict and sentence, and after the judge had died, she claimed at an event held at the Overseas Press Club in New York that the judge had told her before the start of jury selection that Sheppard was guilty as hell.

Attorney F. Lee Bailey, who was working on a habeas corpus petition for his client Sheppard, attended the Overseas Press Club event, heard what Kilgallen told the crowd, and then asked her privately if she would help him. Some days later, as Bailey wrote in his memoir The Defense Never Rests, we obtained a deposition from Dorothy that was inserted into the petition submitted to Carl Andrew Weinman, judge for the United States District Court for the Southern District of Ohio. Bailey also included in the habeas corpus petition a statement from Edward Murray, who had worked in 1954 as a court clerk at the Cuyahoga County Court of Common Pleas. Similar to Kilgallen's statement, Murray's statement indicated that Edward J. Blythin, the original Sheppard judge, had declared Sheppard guilty even before the grand jury indicted him on August 17, 1954.

In July 1964, 4 months after the Overseas Press Club event where Kilgallen broke her silence about the deceased Judge Blythin, Judge Weinman of the federal court granted Bailey's habeas corpus petition, Sam Sheppard was released from prison amid much newspaper publicity, and Sheppard met Kilgallen at a late night champagne party, as described by Bailey in The Defense Never Rests, in Cleveland.

After Kilgallen's death, Sheppard was retried and acquitted.

Kilgallen was publicly skeptical of the conclusions of the Warren Commission's report about the assassination of President Kennedy and Jack Ruby's shooting of Lee Oswald, and she wrote several newspaper articles on the subject.

On February 23, 1964, she published an article in the New York Journal-American about a conversation she had with Jack Ruby, when he was at his defense table during a recess in his murder trial.

She also obtained a copy of Ruby's June 7, 1964, testimony to the Warren Commission, which she published in August 1964 in 3 installments on the front pages of the New York Journal-American, the Philadelphia Inquirer, the Seattle Post-Intelligencer, and other newspapers. Most of that testimony did not become officially available to the public until the commission released its 26 volumes of hearings and exhibits in November 1964, around the time of the first anniversary of the assassination.

On November 8, 1965, Kilgallen was found dead in her Manhattan townhouse located at 45 East 68th Street. Her death was determined to have been caused by a fatal combination of alcohol and barbiturates.

One author has claimed that she was murdered to prevent her from revealing a conspiracy to assassinate John F. Kennedy. Her funeral mass took place on November 11 at St. Vincent Ferrer.

She said on camera that:

Although she was occupying Kilgallen's seat, No one could ever possibly take her place.

In 1960, Kilgallen was one of the initial 500 persons chosen to receive a star on the Hollywood Walk of Fame.

In a 1996 memoir, Kilgallen's colleague and friend Theo Wilson wrote that her work as a crime reporter was often overlooked during her lifetime and was forgotten after her death:

Part of being a good reporter is to be anonymous, to stay out of the story so that you can better watch and study and listen to the principals. She couldn't do that, mostly because people wouldn't let her. She'd walk into a trial and the prosecutor would ask for her autograph for his wife or the judge would send out greetings.