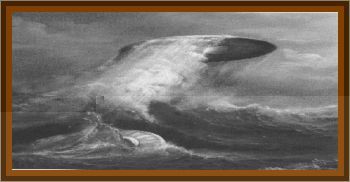 Many of the UFO cases in the Vietnam War are not verifiable and are mostly passed around as stories between soldiers.

One such story is that of crewman Norman Burns’s odd encounter with a water USO near the end of the war. At the time, he was serving on the USNS Kilauea (T-AE-26) during a patrol of the Indian Ocean along with a destroyer and a carrier.

One night in 1974, Burns and a friend were standing on the deck of their ship, idly watching another ship in front of them in formation. The ship was kicking up a trail of phosphorus algae behind it.

As they watched this light display of nature something else began glowing in the depths, becoming brighter and brighter until it became a blinding orange/yellow ball just under the surface.

The trail began to glow and got extremely bright. Out of nowhere, a ball of light leaped out of the water, rolled over the destroyer, just missing smashing into it, and dove back into the ocean on the other side and sinking back into the dark depths.

We just stared at each other with our mouths open. We could not believe what we saw, but I asked friends of mine who were on watch on the bridge if they saw it and they all did, but no one was able to identify what it was. There was nothing ever reported that I know of though and we just quit talking about it.

I bet the destroyer got a good look at it. It went right over the bridge of that ship and it was big. Maybe 150' to 200' in diameter.