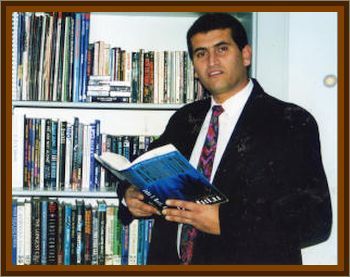 An abduction case from Australia has resulted in what may be the worlds first DNA test of abduction related biological material. The intriguing results raise many questions about the physical nature of abduction and also illustrate the need for more intensive scientific research on this worldwide mystery.

Peter Khoury, was born in Lebanon in 1964 and moved to Australia in 1973. There he met his future wife Vivian at school in 1981. Peter & Vivian were married in 1990 and as of this writting have 2 children. Peter works in the building trades and has owned his own business in cement rendering.

Peter & Vivian had their first UFO experience in February 1988, a simple sighting of unusual moving lights. But in July of 1988, Peter had a deeply disturbing, consciously remembered contact experience that, he says, changed his life.

While lying on his bed, he felt something grab his ankles. He suddenly felt numb and paralyzed, but remained conscious. Then he noticed 3 or 4 small, hooded figures alongside the bed. He experienced telepathic communication with one or more of these beings, he was told to relax and not be afraid because it would be like last time. He then saw that they were about to insert a long needle into the side of his head, whereupon he blacked out.

He awoke some time later, leaped out of bed and ran into the living room where he found his father and brother dozing. Both he and his brother felt that only 10 minutes had passed since they had last been awake, but they soon realized that an hour or more had passed. The next morning, Peter & Vivian noticed that there was an obvious puncture mark on the side of his head, with a trace of dried blood. At this time, Peter had never heard of alien abduction. His memories were vivid and alarming, but he could find neither answers nor comfort from friends and acquaintances.

Peters subsequent attempts to connect with local UFO groups and experiencers proved frustrating. Eventually, in April 1993, he resolved to found a new group in Sydney, the UFO Experience Support Association, UFOESA, dedicated to helping people understand and cope with their encounters. He remains the coordinator of that group today. In July 1992, Peter had the experience that became the focus of this case study. Because the experience had disturbing sexual aspects, Peter was very reluctant to talk about it. He first mentioned it to Bill Chalker, one of Australia's leading researchers, in 1996. He showed Chalker that he had recovered an unusual strand of hair from the encounter.

At the time, Chalker felt he could not do anything with the physical evidence, but over the next several years, he assembled a group of scientists and forensic investigators willing to work on UFO-related cases. With his invisible college associates, Chalker discussed the possibility of doing polymerase chain reaction, PCR, amplification and sequencing of mitochondrial DNA that might be recovered from Peter Khourys hair sample. In early 1998, these researchers, now calling themselves the Anomaly Physical Evidence Group, agreed to do the DNA testing on the hair sample. Chalker points out that alien beings are most often described by experiencers as having no visible hair. But one type, often called Nordic, is described fairly often as having distinctly human-like features including hair, often, though not always, blond in color. A number of well-known abduction cases have involved human-looking beings with hair, including the 1975 abduction reported by Travis Walton, and the 1957 Brazilian abduction reported by Antonio Villas. Peters case has some similarity to that of Villas Boas, who said he was forced to have sex with an aggressive humanoid female aboard a landed UFO.

Khoury told Chalker that his encounter of July 23, 1992 began at 7:30 a.m. while he was in bed. He had recently been injured at work and was taking pain medication. Earlier that morning, he had driven his wife to work, then returned home and went back to bed for a short while. Suddenly, he bolted wide awake and sat up. There was a pair of humanoid females sitting on the bed, both entirely naked. These two women looked human in nearly every way. They had well proportioned adult bodies. One looked somewhat Asian, with straight dark shoulder-length hair and dark eyes. The other looked perhaps Scandinavian, with light colored, maybe bluish, eyes and long blond hair that fell half-way down her back. Her hair was especially notable to Peter Khoury. I had never seen a hair style like that. It was curled something like Farrah Fawcett, but to an extreme, It just looked really exotic in a way.

Khoury felt that these women were not exactly human. Their faces were somewhat odd, not unattractive, but too chiseled, with very high cheekbones and eyes that were 2 or 3 times larger than normal. Khoury took special notice of the blonde. Her face was too long, he felt. I have never seen a human looking like that.

The blonde, who was sitting in a kneeling position on the bed, seemed to be in charge. Khoury thought she was communicating telepathically with the dark haired woman, who was sitting with her legs partly folded under her. There was something stiff, almost blank, in the expressions of the women, Peter thought.

Though stunned by the sudden appearance of the women, Khoury had only a few moments to consider how they could possibly have arrived in his bedroom before the blonde reached out with both her hands and cupped the back of his head, drawing his face toward her chest. He resisted. She pulled harder. He kept pulling back. She was pretty strong, She pulled me over and my mouth was basically on her nipple. And I bit.

Khoury didn't know why he bit the woman, but even though he felt a small piece of her nipple come away in his teeth, she did not cry out. But the expression on her face was like, this isn't the way. In a way it was shock or confusion, She looked at the Asian one, then at me like, this isn't the way it's supposed to happen. You've done this wrong. Involuntarily, Khoury swallowed the small fragment in his mouth, and it caught in his throat. He went into a coughing fit. The two women simply disappeared.

Once he realized the women were gone, he tried to clear his throat by drinking water. It didn't work. Then he had an urge to go to the bathroom. He realized that his penis felt very painful. Standing in the bathroom, he pulled back the foreskin and found two thin blonde strands of hair wrapped tightly around. He struggled to unravel the pieces of hair as the pain became an intense burning sensation. Finally he managed to removed the hairs, immediately put them in a small sealable plastic bag.

The reason I did that was because I knew that there was no way, no way at all, that a hair that size and wrapped around the way it was should have been there, Thinking of these women, the thing in my throat, the hair, something bizarre had just happened. Peter resolved to keep the hair sample in case it should ever prove useful in shedding light on his experiences.

The thing in Khourys throat stayed there for 3 days. He coughed constantly. He tried clearing his throat with water, bread, anything he could think of, but nothing helped. On the 3rd day, the feeling in his throat just went away. He did not want to tell his wife how his coughing fit had come about, but two weeks later he decided to tell her. I was shocked, She accepted it better than I did.

The pieces of hair, carefully stored away since the encounter, became the subject of the first openly-reported scientific DNA test on a possible abduction related sample. The blond hairs were extremely thin and almost clear in color. It was determined that the hair was not chemically treated, because if it had been, little or no mitochondrial DNA could have been recovered. However, using the PCR, polymerase chain reaction, process, good quality DNA was recovered.

For comparison, samples were also taken of Peter Khourys hair and that of Vivian. DNA was successfully extracted from Peters hair, but no usable DNA was recovered from Vivians, possibly because of chemical treatment. After thorough testing of the hair samples, the scientists of the Anomaly Physical Evidence Group arrived at a startling conclusion. The thin blond hair, which appeared to have come from a light skinned Caucasian type woman, could not have come from a normal human of that racial type. Instead, though human, the hair showed 5 distinctive DNA markers that are characteristic of a rare sub-group of the Chinese Mongoloid racial type. A detailed survey of the literature on variations in mitochondrial DNA, comprising tens of thousands of samples, showed only four other people on record with all 5 of the distinctive markers in the blond hair. All were Chinese, with black hair.

Mitochondrial DNA is passed only from mother to child and therefore offers a means of tracing ancient ancestry on the mothers side. The findings suggest that all 4 of the Chinese subjects share a common female ancestor with the blonde woman. But there is no easy explanation for how this could be. Testing for nuclear DNA, if such could be recovered from the blond hair, would be more complex and expensive than the tests run so far, but might show that the lineage of the blondes father was even stranger than that of her mother. But such testing must await funding that has yet to be found. So far, the members of the Anomaly Physical Evidence Group have financed all their work themselves.

Without the blonde hair sample, the story told by Peter Khoury is but one more in an almost endless sequence of wrenching, but unprovable, abduction accounts. The hair, however, changes everything. It undeniably exists, and thorough forensic testing shows that it is anomalous. It seems likely that no person with blond hair and an exact DNA match to Khourys blonde could be found in the city of Sydney, nor on the continent of Australia, nor probably anywhere in the world.

Who then was the being whose blond hair inexplicably became wrapped around Peter Khoury's penis?

Are we dealing with humans from elsewhere, namely those with human DNA, albeit very rare and somewhat anomalous? asks Bill Chalker. This case raises all sorts of issues, such as human panspermia, the theory that human-like beings may have migrated to Earth in the fairly recent past from elsewhere in the galaxy, perhaps giving rise to the sudden appearance of modern homo sapiens, a species not directly descended from their immediate predecessors, the Neanderthals.

Also, given the Asian mongoloid connection, we looked at the problem of European like rare Asian types in the past, The controversial saga of the Taklamakan mummies in remote Western China is turning the early history of China on its head. These mummies include people who are quite tall, some 6' or so, and some are blonde. I'm not suggesting a connection here, but you can understand this investigation has opened up all sorts of interesting possibilities about the biological nature of some of the beings implicated in abduction cases.