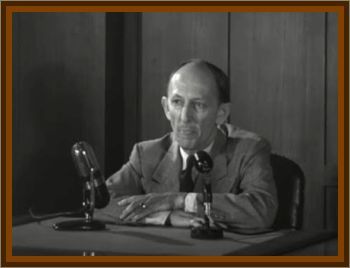 Donald E. Keyhoe graduated from the U.S. Naval Academy in Annapolis, Maryland, in the Class of 1920, with a B.S. degree and the commission of a 2nd Lieutenant in the Marine Corps.

The young Lieutenant became a Naval aviator, piloting both balloons and airplanes in the period between the World Wars.

After a night crash at Guam, he retired from active duty and began freelance writing.

He also wrote factual articles for major newsstand magazines of the time such as Saturday Evening Post, Cosmopolitan, American, Redbook, and True.

During the late 1940s and early 1950s, Keyhoe personally test-flew a wide variety of aircraft and evaluated their performance and features for True Magazine.

When the first "flying saucer" sightings were reported in June of 1947, Keyhoe, as an experienced aviator was skeptical.

But when True asked him to investigate in 1949 and he interviewed numerous fliers as well as military officers in the Pentagon, he discovered that expert observers had seen the unexplained discs, many at close range.

His article "Flying Saucers Are Real" in the January 1950 issue of True became one of the most widely read and discussed articles in publishing history, and caused a sensation. The article was expanded into a paperback book.

In January 1957 Keyhoe had become Director of the newly formed National Investigations Committee on Aerial Phenomena (NICAP) in Washington, D.C., which under his leadership gave serious publicity to the UFO mystery through the 1960s and encouraged Congressional hearings.

In 1958, Keyhoe appeared on TV. His commentary about UFOs was pre-censored by the Air Force. As the show went on, when he tried to interject original statements that were not in the pre-censored script, the network cut his sound, saying later that he was about to violate security standards. Conspiracy theorists believe that what he was about to reveal were several unknown military studies that make the assertion that UFOs were interplanetary.