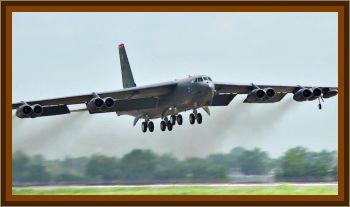 While watching a test drop of a stores container by a B-52, two Air Policemen observed a solid looking red or orange colored rectangular shaped object in the sky. The object first appeared to the west and after first movement it appeared to stand still and pulsate.

The object began to move again and large oscillations were reported. The reported oscillation covered a fairly wide portion of the sky and the observers reported extremely horizontal movement of the object.

The apparent size of the object was reported to be a pea or a dime held at arm's length and the actual size was estimated to be as large as a fighter aircraft, 100' major dimension.

The UFOB report completed at Edwards AFB in accordance with AFR 200-2 stated the probable cause of sighting is unknown.

The observers were T/Sgt. Charles B. Fisher, 6510th Air Police Squadron, and T/Sgt Jackson. The estimation of the length of the observation varied from 90 seconds to 5 minutes.