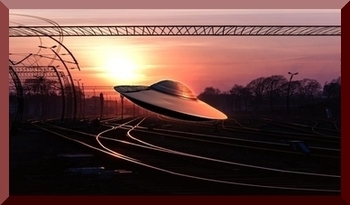 My mother, who is in her early 80's, told me this story about 10 years ago. She told me that she has never mentioned it to anyone and only decided to tell me about it because she knows I'm interested in these things.

She told me that when she was 17 she lived with her family in a house that was just yards away from the railroad tracks. They were living in Keakuck, IA. Her father and brothers all worked for the Santa Fe railroad which was why they lived so close to the tracks.

Once in the middle of the night she sat up in bed and felt compelled to look out her window. She said she could tell there was something large there although she really couldn't see anything, just a huge black oval space where there were no stars or anything else visible. She could tell it had a shape and it hovered over the tracks for about 10 minutes and made absolutely no sound. She never saw anything like it again but clearly never forgot about it.

She didn't tell anyone else about it for obvious reasons. The weird part about this to me is that no one had even said anything, that I know of, in 1939 about a similar incident.

In later years after she married my father, moved to Portland, OR and had 5 children we were always interested in Science Fiction movies or TV shows and just always believed they existed. My oldest brother joined the navy when he was very young and stayed for 16 years. During his time he was in China Lake for a few years and said he saw something that he could never ever tell us about, which only made me more curious. I found out that the best way to sober him up if he's had a few too many, is to ask him about what he saw. He sobers up and almost gets angry that I made him think about it. Whatever it was..