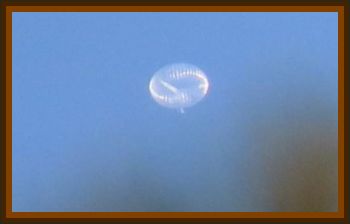 The object hovered just over the ridge on the West side of the Housatonic River, and they stopped and got out for a better look and were joined by another couple, a boy and girl also driving back from Westchester.

Meanwhile on Spooner Hill, to the East, a witness on his way to visit his friends, a young married couple, saw the same object and when he arrived at his friend’s house, he called them outside. By this time the object had dropped behind the ridge, although they could still see its lights shining over the crest of the hill. They got into the witness car and drove down the hill to Route 7, where they met the 4 younger people. All 7 then drove north into town to bring back 2 additional witnesses.

The large object was no longer visible, but they now saw a dozen or so smaller whitish lights maneuvering in a circular pattern just this side of the ridge. These lights then separated into a single line and proceeded North toward Mt. Algo, just southwest of the main section of town.

The witnesses got into their cars and followed the lights toward Kent. The 2 additional witnesses were dropped off in town while the other 7 turned West on Rte. 341 and crossed the bridge over the river, heading toward Mt. Algo. There they turned South on Schaghticoke Road, which runs along the base of the mountain, to Bonu’s Field, an open spot about a mile South. The group assembled there briefly but was unable to see anything.

Meanwhile, at about the same time, a separate group of 3 teenage girls, camping out in one of their backyards along the Housatonic, observed a line of lights descending Mt. Algo on its steep North side. The witnesses at Bonu’s field had gotten back in their cars and drove North again to the junction of Rte 341, where they discovered a small white car parked, which had not been there a few minutes earlier.

They parked their cars and the 2 younger boys got out and asked the occupants of the white car, 2 unidentified girls, if they had seen anything unusual. They said that they were waiting for a group of hikers who had told them an hour earlier that they were hiking over the mountain, and that the girls should meet them there. Just then a group of 15 to 20 hikers came jogging down Schaghticoke Road from the same direction the young people had just driven, they had not seen anyone on the road. Each hiker had a lighted hat like a miner’s hat on his head and they all carried poles or rods. They were mumbling or chanting and approached in a double column.

They did not answer the boy’s questions as they passed on either side of them, when asked where they’d come from. According to the young people, the hikers apparently turned right at Rte 341 and headed towards Kent. However, when they all got back in their cars and drove after them, the hikers were nowhere to be seen, as though they had disappeared into thin air.

According to the 2 young men and the younger couple, there were at least 2 hours they could not account for.

The 3 older people could not recall what they did or where they went after the hikers passed. Hypnotic regression was apparently attempted, but the results are not described.