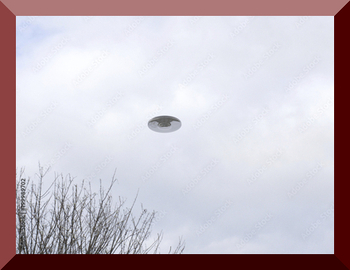 The object was noticed approaching sundown as it flashed reflected sunlight brilliantly like a mirror. It didn't flash again but appeared to be a reflective, metallic, egg shaped object hovering to the south over Washington D.C. or Chevy Chase, MD. It first appeared similar to a blimp, but had no markings, tail surfaces, flaps, openings, windows, lights, rivets or other surface details. It moved silently and left no contrail.

Kensington is at a higher elevation than Washington but it was difficult to judge the size, distance and height of the object. It appeared to be at about 20° elevation from the horizon and disappeared at perhaps 60° from horizon.

The object moved very slowly to the west parallel to the ground for several minutes, and after angling upwards 45° or 50° it began to ascend rapidly and in 15 or 20 seconds it became a tiny point of light in the dark blue sky before disappearing. Its upward movement was of continuous and rapid acceleration at several times the speed of a conventional aircraft. As it moved the object's apparent shape changed from egg like to a flattish ellipsoid, more specifically a symmetrical convex lenticular cross section top-to-bottom, a slightly elongated ellipse along it length, the narrower part of which was its rear. The object was also seen by my wife and neighbors.