Lights Similar To The Phoenix Lights 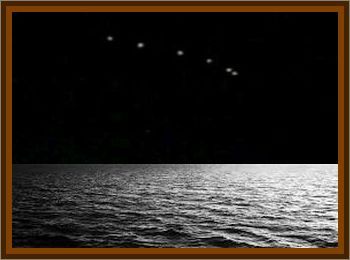 Observed 5 lights in a inverted V rise from the horizon, hover for a few minutes and then sink back down below the horizon. We were at sea on our way back to the U.S. from Japan. Lights were simular to the Phoenix V lights.

Me and my friend were walking accross the flight deck, I don't remember why anymore. It was at dusk but not dark yet. We first saw a bright light on the horizon directly behind the ship. It rose up and then there were 3 which continued to rise to 5 lights.

They stayed there for awhile not moving or anything. I told my friend I should go get my camera but he said the lights would be gone by then. Shortly after that the lights descended to below the horizon.

We went the the CIC room and asked the radar operator if there was anything behind us, he said no. We never said why we were asking or said anything about what we had saw. I can't remember that we ever talked about it after that because my buddy said no one would believe us anyway and I agreed.

Until I heard about the Phoenix lights on March 13, 1997 I haven't mentioned this to a whole lot of people. As to when this happened, I am thinking it was 3 days out of Japan and the ship was traveling about 30 knots.