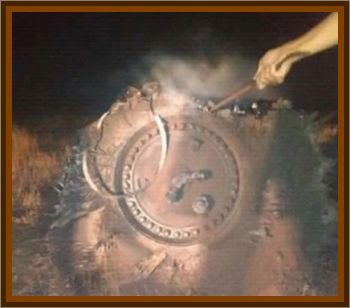 If ufologists Nilolay Subbotin & Emil Bachurin of the Russian UFO Research Station are to be believed, a 2000' long UFO lies in a gorge in the Tien Shan Mountains of Kyrgyzstan near the border with China. The pair claims that the huge dirigible shaped object first attracted attention on August 28, 1991 when it appeared on the radar screens of the Mangishlak Peninsula, flying from the west to east at 600 MPH and at an attitude of 22,000'. Thinking that the object might have been launched from Kapustin Yar, Mangishlak personnel contacted the Cosmodrome. Kapuston denied any knowledge of the object, although they confirmed its appearance on radar.

They intercepted the object over the western shore of the Aral Sea. The pilots observed the object both visually and on their radar, described it as dirigible shaped, 2000' long by 350' wide, with very little surface detail except for two round portholes near the front, and some sort of strange green markings near the rear. The object did not make any hostile moves or react in any way to the presence of the jets. When all attempts at contacting the object failed, the squadron leader proposed positioning the jets on either side of the object at a distance of about 2600' and gently but firmly directing it to the Air Station. If necessary, the jets were to fire warning shots to encourage the object to cooperate.

When the jets were in position around the object, it soon became apparent that, within 2700' of it, the weapons systems of the MIGs shut down for no apparent cause. Worse yet, at a distance of 2000' from the object, the engines of the MIGs began to malfunction. The object began to make zigzag evasive maneuvers and to increase its speed from 600 mph to 4,200 mph. These maneuvers were verified by radar at Baikonur, Alma-Ata, and Bishkek. The jets backed off as it became apparent that their plan to force the object to land was not going to succeed, and the object proceeded east through Alma-Ata airspace at a slightly lower altitude of 2½ miles. Radar dispatchers at Alma-Ata, fearing a collision with a conventional aircraft, issued a general alert for air traffic to avoid the area. At 5:27 p.m., the object disappeared from radar in the area of Lake Issyk-Kul near the border of Krygyzstan and Kazakhstan.

The next major development in the story occurred a month later when records began to trickle back to Bishkek that a huge UFO had been seen to crash in the Tien Shan Mountains 65 miles east of Przhevalsk near a peak known as Pik Pobeda, Peak of Victory. The actual site lay in a gorge known as Shaitan Mazar, Grave of the Devil, near the Saris Dzas at approximately Latitude 42° 11' North and Longitude 79° 41' East. A search party of experienced climbers led by Michael Eltchin of Sakkufon was immediately dispatched from Bishkek, but the group was unable to reach the site due to heavy early snowfalls and the danger of avalanches in the Saris Dzas valley. An attempt to reach the site by an Air Force helicopter ended tragically with a crash that cost several lives. The search was called off until after the spring thaws.

In June of 1992, a 2nd expedition was mounted, consisting of three groups of volunteers having both a scientific background and mountain climbing experience. This expedition was headed by Major German Svechkov, director of the Kazakh branch Sakkufon. They arrived on site on 6/12/92 and set up a base camp 1½ miles NNW from the actual crash site. The path of the object was noted to be such that it had slid 5600' after hitting the ground. It then exploded from within its center, blasting it into almost two equal parts and bending its internal structure outwards from the center of the explosion. Decks and interior features were visible inside the object through the gap made by the blast.

The expedition immediately notice the following unusual effects when they began to examine the object:

They could not photograph the object because some sort of radiation exposed all film and ruined all videotape.

Whenever a member of the party got closer than 2700' to the object, he began to feel unusual anxiety, depression, and exhaustion.

Within this 2700' range, the men's hair stood on end. Instruments showed an unusually high amount of static electrically in the area.

Compasses and magnetometers refused to function properly in the area of the object.

All clocks and wristwatches stopped at a distance of 2000' from the object.

Anyone who approached the object began to suffer from some sort of radiation burns at a distance of 1600'.