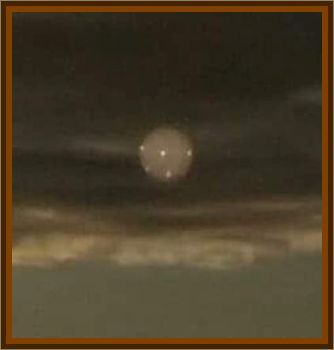 The object was seen at 6:37 p.m. local time when the men were getting ready to shoot crocodiles twenty miles up the Norman River from the town of Karumba. They saw a round patch about half the size of a full moon, a mixture of yellow, red, and green iridescent light travelling twice the speed of a Canberra jet bomber. The object stayed in the sky 5 to 8 seconds before disappearing.

There's no shenanigans about this. It was something none of us had ever seen before. What impressed us most was that the object travelled parallel to the ground. It did not move up or down, as you would expect with something natural. And the thing was dead silent.

According to Mr. Green, the object was 10° to 12° above the horizon. It travelled northwest, and appeared to be only two or three miles from the hunting party, and about 2000' from the ground. An object half the diameter of the full moon viewed at a distance of 2½ miles figures out in size, 60' in diameter.

Several other persons reported having seen a strange flying object over northwest Queensland on July 8.

These men with their wives were on a caravan holiday when they saw the object about dusk. The party of eight persons was camped near a tree lined creek, 40 miles east of the town of Cloncurry, a few miles south from the crocodile hunting party.

Mr. Watson of the group reported the incident as follows:

The women were getting supper, and we men were standing about talking when Lionel Afford called out: Look!

I swung around to the north and saw something in the sky, a short yellow streak, disappearing between the trees on the creek bank. I could see it flashing through the trees. It seemed about 12' to 20' from the ground and was descending at a slight angle like an aircraft coming in to land. It had three lights, a red, a yellow, and a yellow/green. We could see no more detail, it looked about as far away as the horizon.

These two groups of people apparently observed the same phenomenon. The time reported by the hunters, 6:37 p.m. July 8, corresponds to the time reported by the campers, about dusk July 8. The colors of the object reported by both groups correspond. The hunters described a mixture of yellow, red, and green iridescent light, the campers referred to three lights, a red, a yellow, and a yellow/green. The position and motion of the UFO as observed by both groups correspond to their respective positions, the camper group located some miles south of the hunters. The hunters told of the object as having traveled northwest, parallel to the ground, about 10° to 12° above the horizon. The campers told of looking to the north, the object disappearing between the trees, observed as 12' to 20' from the ground, descending at a slight angle, and at such a distance that it looked about as far away as the horizon. The object viewed was north of both groups of observers, its path was approximately parallel to the ground, to the party farther north the object was 10° to 12° above the horizon, to the party farther south the object looked close to the horizon.

Reports indicate that still other persons saw the same object. A railway surveyor, Mr. Thomas George Cliff had reported having seen a strange aerial object near Cloncurry in approximately the same neighborhood during the same night, July 8.

Farther north the same night, July 8, a huge, glowing, red object landed on top of a hill on Prince of Wales Island, ten miles off Cape York Peninsula. This report came from a native woman, Mrs. Napan Abednego, of Thursday Island, Mrs. Abednego, her husband Koko, and their three children witnessed the phenomenon. The Abednego’s had been on a visit to the lonely Prince of Wales Island where they own a small orchard.

Natives on the island where the UFO landed were terrified and refused to go near the landing place. Mrs. Abednego said the strange object was on top of a hill at Port Lihou, on the southern tip of Thursday Island.

If assumed that these reports all refer to the same UFO, and from the detailed facts in the case, this is a reasonable assumption, a total of 17 persons besides an undetermined number of frightened natives on Prince of Wales Island witnessed the phenomenon. When one plots the localities of these sightings on July 8 on a map, from the camping site of the Victorians to the Prince of Wales Island, it can be seen that all of the reported sightings in this region on that evening lie along a straight line running almost due north for a distance of 750 miles.