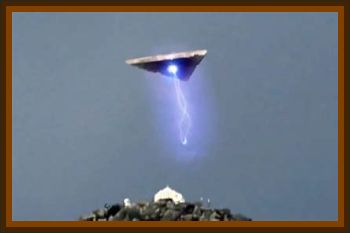 Last Tuesday night, I was leaving a Kansas City tavern where I was playing pool in a pool league.

Myself and a friend were in the alley behind the Quaff Buffet, near 10th and Broadway downtown. It was about 10:00 p.m., Central Standard time. I happened to be looking up, when I noticed what I first thought was a flock of geese flying over us in a V formation. 9 altogether, one leading and 4 trailing each side. But then you could see the dark triangular outline.

It was a black triangle. I have seen a huge one in the past near McConnell AFB in Wichita, KS a few years back. This one was much smaller, or else a lot farther away. The lights were configured differently too.

It was about ready to drift out of sight over a building, when I mentioned it to my friend:

He glanced up just as they were drifting where a building blocked the view. Then he looked at me and smiled.

Did you see it? I asked.

C’mon, I said, grabbing his arm as I ran towards the middle of the alley. He saw I was serious and we ran about 20 steps and looked up. Sure enough, there it was. it was totally silent and was drifting rather than flying.

It had quite a yaw going, and was not going straight ahead but drifting in about a 45° tangent from its front.

We could see it very clearly for about another full minute.

That’s a stealth, said my friend.

Look at how slow it’s moving, I said. It’s moving so slowly, it’s almost hovering. And you can’t hear a thing. It’s a black triangle.

As others have already pointed out, the stealths do not have these flight characteristics. I have seen them a number of times, and they did not have these lights lit up underneath them either.

There have been no other reports. Yet it flew right over the downtown area. I cannot validate the altitude, but the appearance was that it was fairly small and gliding at around 700' to 1000' at most. Why would they purposely fly a secret aircraft over downtown Kansas City where anyone looking up can see it? And all light up? And how do they silently drift obliquely like they do?

I can’t believe how frequent these sightings are becoming.