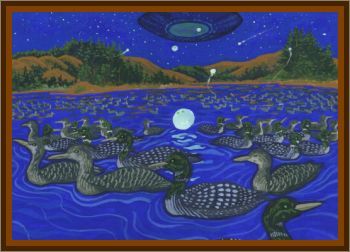 We started going up this side of the lake then up the other section just doing a little looking, for most of the day and as it got later people started leaving, going home till we were the last guys here.

We saw the light was on the truck so we went over and turned it off. The guy who I was with wanted to do one more turn around the lake so we got back in and when we got around to that other point, it was starting to get very dark. So we decided to just go along that bank, pointing to the far shore to the south east of us, and then go home because it wasn't producing.

There were fish jumping earlier and it was fairly quiet now. The lake was fairly calm but there was no action. We hadn't had any bites. So we started going along that far end bank so we got towards the center where those guys are in that red boat. And we headed that way. And now it's gotten really dark. It's very hard to see the truck, and I had a white truck at the time. So I suggested you can either gun it around the lake or we can just go slowly across the center.

He said: Okay. I was letting him drive and I was in the front.

So we started coming directly across and I was facing the hill cause I was in the front and he was facing the truck, across on the opposite side of the lake, and as we got maybe 20' from shore I saw this light up over where the field is, more or less behind, but it was higher up and at first I thought it was a satellite, I said to him: Have you ever seen one of those satellites before?

He replied: No, he started turning around, and right away I knew it wasn't a satellite. It was too low, too big, too everything, I couldn't understand what it was at first. That's not a satellite.

He turned around, he's looking at me. He's got a puzzled look on his face.

So he guns the motor.

You're pointing that way? asks third interviewer, pointing to the far shore.

We're pointing this way to come back, cause he'd just started his turn and I'm looking at him.

He's kind of: Uh. Uh. Looking over his shoulder looking at it.

Then finally I stood up and was like: Lets go!

He opened up the motor and he turned around to look straight across the lake to where he's driving, the way he's facing.

The whole center of the lake is covered in thousands of birds. Ducks, or Loons. I don't know. But there must have been thousands of them. We couldn't drive through them.

I said: Just gun it. They'll move. They're birds for Christ sakes.

So he guns it. Poof! Last thing I remember.

Next thing I remember, pointing back to the willows or dogwood shrubs on the nearby bank by the parking area, is when the water's deep it comes half way up this loading ramp, so all these little trees or whatever they are. They're in the water. The next thing I remember, these branches are in my face and I'm pushing them away, I look around and I said to him: You're in the trees you know. You're 10'from shore. Just pull back, go around them.

So he backed it up and he gunned it to shore and we jumped out. We're looking back across now.

What was that? What was going on?

Its like: Who cares? We're here. We're okay. Lets just go over and load our shit in the truck and let's go. Right?

2 minutes later he wanted to take it and I wanted to leave it, and as we're loading up and I don't know if what we saw is lights over there, pointing to area above north end of lake. or what, it's hazy.

He said something like: Stay nearby. Don't let them take me, or something else.

Me too. I don't want to go anywhere either you know.

He said: Don't, don't look up cause they'll know what you're thinking, like he'd seen too many movies.

He said: Don't look up, and right as he said that, where there is no stars, it was just dark, this yellow light... turned on... turned off... perfect circle, size of a pencil eraser in the sky, he shows size of pencil eraser between his thumb and forefinger, and holds his hand at arm's length, bright yellow, just turned on, turned off. As soon as that happened he was bending over and I was standing there. He was undoing the motor. I was facing the lake and as soon as I saw it, I grabbed his coat and he looked up and he threw himself back against me. And then it was off already.

Then it was panic. We threw everything in the truck and when everything was loaded up we stopped and we looked. And we just kinda looked across the lake at these lights and then the phone rings and then this girl that I'm seeing she says: How come you're not home yet? Where are you?

I said: We're at the lake. We'll be home. Weird things are happening. If I don't make it home, I'm at Jacko Lake. And I hung up.

I looked at the clock. It was a 10:45 p.m.. So I don't know. It's weird. There was no feathers or anything on the boat. I don't remember from where we were 30' from that side of the lake to when we got here.

That's the only time you saw the birds? asked one of the interviewers.

Just when I said: Gun it. They'll move. I don't remember anything until I woke up and I was over there in the trees.

When you looked back there was no birds? the same interviewer asks.

No, but the funny thing was when we were fishing we saw one eagle and maybe one loon. There was nothing. How can you fill a lake with birds unless you put in an order for every one in BC?

So how closely spaced were they? asks a second interviewer.

They were packed. They were packed. You could step on them back to back if you could walk on them. It's weird. First thing I remember was like Hitchcock, The Birds, because there was so many.

When we loaded up the truck, it was like: Lets have one quick look. Look one more time. We looked across there, back to other side of lake, it looked like there was one little light. It looked like a star. It had other stars around it. They would move. There would be one, sitting there. Then it would move... Shoop and stop. And one looked like it was to come in off the bottom of the star and then it just kinda did a little semi circle. It was like they were playing. It was like they were just screwing around.

Okay, we didn't expect guys to be out on this lake fishing, and they saw us so lets really throw them for a screw. But it was nasty.

I went home that night and I was living alone. I talked to someone on the phone until about 4:00 a.m. and the sun started coming up.

When you see something like that you think that everything someone has told you your whole life is bullshit.

I brushed my teeth. I made a beeline for bed. Door closed. Light off. And on the phone constantly: I don't care how tired you are. You're not hanging up on me. And the next day, I have Psoriasis, and its flared right up. It was almost gone and it was back. It was all nerves.

I told my doctor too and he's like: I don't know if you should tell other people about it. Stuff like that.

Was he supportive? asks the second interviewer.

Was it overcast or was there a moon out? The third interviewer asks.

No. It was a clear night.

Did you see the moon? The third interviewer asked.

I don't remember seeing the moon. You could see lots of stars. I drove back to town. I probably got there in 8 or 10 minutes. No word of a lie man. My truck was going 120 the whole way. When I came into town, you see lights down in the valley and I'd never driven there at night before, and it was like: Oh. More lights. Then I realized, it was like: Okay. That's all right. He just sat there in the seat. This guy, he's a pretty brave guy, he's like: We never saw that. We never saw it.

He was like: We never saw nothing. No. It was something else. No. We couldn't have. All the way back to Kamloops. And now, I don't talk to this guy anymore.

And you didn't hear any sounds? The interviewer asked.

And loons are pretty noisy. The interviewer asked.

Well there's not that many loons around here to fill a lake. Needless to say, I don't fish after dark anymore.

Our society as a whole is cheated by our government's inability to admit that there is something more behind this phenomena, than hoaxes, delusions and misidentified conventional phenomena. We cannot expect human civilization to ever be able to venture beyond our home planet, if we are afraid to admit that other civilizations from other planets may have technological capabilities that far exceed our own.