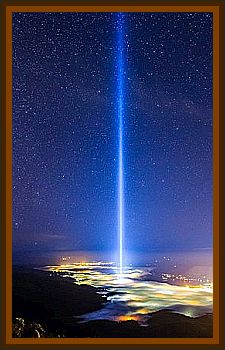 I was in the Army stationed in Kaiserslaughtern, Germany. This incident took place over a week end while several G.I. buddies and I decided to take a weekend camping trip. We were not allowed to drive into France, but we did anyway.

I was a riding in one of the vehicles, so I can not give you directions, landmarks or precise location. I only remember we were somewhere in the western part of France. I won’t elaborate too much so I can keep this as short as possible.

So we got to our location. We saw a place that looked like it might be a good place to set up camp. We could see a flat area on top of a hilly area and decided to hike up and camp there.

We didn’t want to spend a lot of time searching for the right place. We just wanted to get there cause it was getting dark. We were out of town and quite a ways from any populated area. These were back roads in French grape vineyards. There were 6 of us as I remember. We all were in our sleeping bags just staring up at the sky.

I remember it was very dark out. No reflection of city lights in horizon unlike what you might see almost anywhere in the United States these days. The night was very calm and quiet. An otherwise beautiful summer night for camping.

Don’t remember what time it was, but it was late, maybe 11:00 p.m. We all could see the same thing. This very bright light, like a beam came from as far as a person could see in one horizon and passed right overhead and disappeared into the opposite horizon all in about 3 seconds. Not a sound. Some might have looked like a comet or shooting star. Hard to describe visually, but the light was parallel to the ground and seemed low enough that a person could almost have been able to throw a rock up and hit it if he were to time it right. It seemed like a very tubular, round dense light that was contained within itself, because as bright as it was, it didn’t light up any surroundings. There was no burn out effect or tail like might have been seen in a comet or shooting star either. It just kept going. If we hadn’t been staring up at the sky we may not have even seen it.

We could not distinguish any shape or anything that could give the indication of a solid object within the light itself. Probably cause it was traveling so fast. I have never reported this to any one. All I know is that 6 of us saw the same thing and it gave us a good story to talk about for years to come. I still tell people of it. Was it a UFO? I don’t know, but it certainly was something I still don’t have an explanation for. I’ve never seen anything like that again and never had any relapse of space or time or ill health after affects like some people seem to encounter after the fact. This is my story and I’m sticking to it.