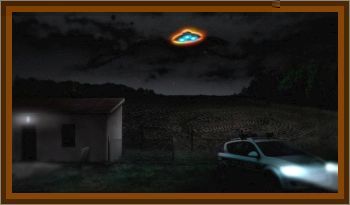 John E. Justice had just left his job at the Ohio Masonic Home for the aged in Springfield, OH and was driving home when he heard a voice tell him let go the steering wheel.

Justice ignored this instruction and the order was repeated, calling him friend.

Justice did so, and the car continued down the long drive of its own accord. The voice, somewhat guttural in tone, came from the passenger seat to his right, and Justice could see the seat was depressed, as though someone was sitting in it.

He asked if he would be harmed, and was told, Friend, I would not harm a hair on your head. Justice then asked what he wanted and got no reply.

He was told that the voice was that of a spaceman, and he had been in the UFO Justice and another witness had seen a few nights earlier.

Justice was then told that he would be able to see him when he left the car, and was told to look above the power lines ahead. He then observed a figure suspended 10' in the air in front of his car.

It was perfectly human in appearance, a male figure of large build, about 6' 6" tall, holding its arms outstretched in front. The being wore a tight fitting, silvery outfit with a belt, gloves, and short boots. He was very handsome, and illuminated by a strange light.

Justice was told that he would be visited again. The figure passed from view and Justice took control of the steering wheel and continued home, very shaken by the experience.