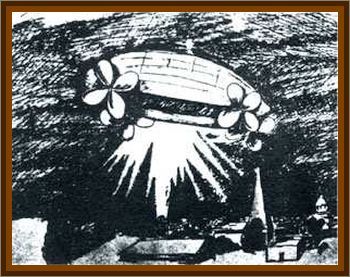 Considerable excitement prevails at this writing in this usually quiet village of Josserand, caused by a visit of the noted airship, which has been at so many points of late.

Mr. Frank Nichols, a prominent farmer living about two miles east of here, and a man of unquestioned veracity, was awakened night before last near the hour of midnight by a whirring noise similar to that made by machinery.

Upon looking out, he was startled upon beholding brilliant lights streaming from a ponderous vessel of strange proportions, which rested upon the ground in his cornfield.

Having read the dispatches, published in the Post of the noted aerial navigators, the truth at once flashed over him that he was one of the fortunate ones and with all the bravery of Priam at the siege of Troy, Mr. Nichols started out to investigate.

Before reaching the strange midnight visitor he was accosted by two men with buckets who asked permission to draw water from his well. Thinking he might be entertaining heavenly visitors instead of earthly mortals, permission was readily granted. Mr. Nichols was kindly invited to accompany them to the ship. He conversed freely with the crew, composed of 6 or 8 individuals about the ship. The machinery was so complicated that in his short interview he could gain no knowledge of its workings. However, one of the crew told him the problem of aerial navigation had been solved.

The ship, or car is built of a newly discovered material that has the property of self-sustenance in the air, and the motive power is highly condensed electricity. He was informed that five of these ships were built at a small town in Iowa.

Soon the invention will be given to the public. An immense stock company is now being formed and within the next year the machines will be in general use. Mr. Nichols lives at Josserand, Trinity County, Texas, and will convince any incredulous one by showing the place where the ship rested.