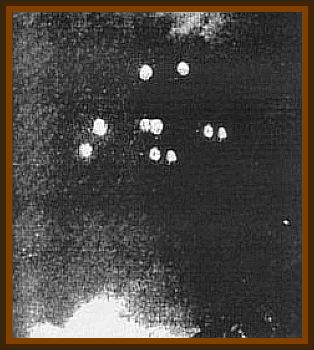 Charles Kastl, 60, an engineer for 38 years with the Elgin, Joliet and Eastern Railroad, was walking along a highway to work when he spotted about nine speeding disks in the air.

He described them as a string of flat circular objects going faster than anything I've ever seen. Kastl said he could see no connecting link between them, but they acted as though the leading disk had a motor in it to power the others because when it flipped, the others would too. When it would right itself, the others would right themselves.

They appeared to be very high, 4,000' and heading north to south.

This article has been deemed important because it is of disk shaped craft prior to Kenneth Arnold, but the original story is that the engineer made the sighting on the same day as Arnold but didn't report it until after Arnold. So, the date is wrong, the location is wrong, and it is just another single witness sighting reported in the wake of Arnold.