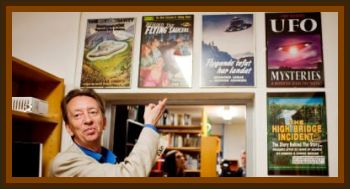 A research team set off for northern Sweden to get to the bottom a Ghost Rocket sighting from 1980 that has been labelled as the biggest UFO mystery in the world and which the Swedish military kept classified for years.

The expedition leader and head of UFO Sweden, Clas Svahn, set off on the trip to Jokkmokk, far northern Sweden together with a support team, divers, a film crew, and the original witness who watched the craft land in the water.

I expect to be surprised, Svahn told The Local, explaining that while he is not a believer, he hopes that the trip can provide answers.

People mistake UFOs with flying saucers. There are many, many reports of strange things in the air, but what we’re interested in is explaining what they are. Every answer is a good answer.

The craft the team is looking for was seen crash landing in the south end of a lake in Muddus, back on July 31, 1980.

The witnesses, Bo and Liz Berg, watched as the elongated, cigar shaped object with 2 protrusions on its sides, came whizzing by them, turned 180°, and performed a controlled landing in the water, disappearing in a spray of bubbles.

The description of the object led the research team to conclude it was a so called Ghost Rocket, a spacecraft that has long held captured the attention of both UFO investigators and the military alike.

According to the UFO Sweden homepage, the sheer number of these reports caused the Swedish military to send out research teams. The rockets were at first believed to be Russian tests of V-1 or V-2 missiles captured from the Germans during World War II.

However, since no fragments have ever been found, the Swedish, British and U.S. military failed to find an explanation. The only concrete evidence the military found was occasional craters in the lake bottoms and damaged aquatic plants.

But Svahn believes that where the military failed, his team may succeed.

He confesses that he has long been interested in UFOs and has been compelled to find out more about them since he was a teenager in the 1970s.

And while he admits that he is unsure exactly what the ghost rocket may be, Svahn is confident that it is made of steel, and that the landing described by the witnesses suggests that the object was being controlled.

Someone was sitting somewhere, he told The Local.

Even better, this is the only occasion we’ve heard of where the object landed rather than crashed. There’s a very real chance that we may find it intact.

The team will begin diving with a host of professional equipment on Friday and will continue their search until Monday.

Meanwhile, a film crew accompanying the expedition is making a documentary about the exploration, which has caught the attention of an international audience and fan base.

However, regardless of the film crew, Svahn explains that the sky is the limit when it comes to the possibilities if something is indeed found at the bottom of the lake.

There are many more sightings in Sweden that match the ghost rockets description. If we find what we’re looking for this weekend, we’ll be investigating the other cases as well.